Saturday, I was invited to speak and show off my Jackson Coosa kayak at the 2011 Dealer Summit for Jackson Kayak at the Rock Island State Park that was going on about two hours from me on Monday October 10th. It was short notice, but I made up my mind I was going; we had friends in from three different states hosting a yearly friendly reunion.

I had been working for days and nights straight, and in the process of buying a house and other things. Sunday I got all my gear ready to go. Yak Attack, RAM Mounts, C-Tug, Leverage Landing Net, Tackle Trays, Dry Bags, Drag Anchors, bait tank,  everything, and anything I would need to show how I set up a kayak to fish for about any species on any type of water.

I worked late Sunday night, and got up early Monday morning and was on the road by 0530 with coffee in hand, and all my gear loaded. It was a beautifully smooth ride just less than two hours to Rock Island State Park.

I met some of the Jackson Fishing Team members (Drew Gregory, Hunter King, Herschel Finch, Josh Tidwell, and Henry Jackson) at their camp. After introductions we headed toward the beach area where a large circus tent was set up. We weren’t told much so I took charge claiming a table and started setting up my kayak. It took the other guys 5 minutes or less, but I’m an extremist. After 20 minutes I had everything almost setup and how I wanted it, so I stood back and had some coffee. Before finishing my cup of joe, cars, trucks and vans of people started showing up. Like I said earlier I didn’t know who I was going to talk to, what I was going to talk about but it looked to be game time.

I just stood back for a little while to soak in the atmosphere, and see what was going on when Josh Tidwell from the Jackson Kayak Fishing Team approached me with one of those high tech devices called an iPad. He had notes and stuff written on it and said “here’s some talking points do you think you can go over this?” It was after market products, price, and outfitting. I looked at it and laughed then said “I got this” with a smile. Come to find out all these people that were showing up were Jackson Kayak, and other kayak  dealers from all over (California, Virginia, Texas, Canada, Colorado, Oklahoma, United Kingdom, South Korea, and many other places).

Herschel Finch was the first to speak to the group and he was also talking about outfitting. He spoke very well and knowledgeable about simplicity. He uses a drag chain and a few other items, no after market rod holders, no electronics, just a couple rod and reels with the bare necessities. He spoke very informatively for around twenty minutes about river fishing, with how and why he did what he did to his kayak.

Next I rambled on for about an hour on the rigging what I have done with electronics, rod holders, tackle trays, dry bags, 2-way floating marine radios, knives, pliers, bait tanks, stake out poles, RAM products, Scotty Products, Yak Attack Products, and on and on. I was describing how I install, what hardware I use and why. I had a few products that I could pass around the crowd so they could physically see them like the Yak Attack Mighty Mounts. After I realized that these men and women I were speaking to are dealers that not only want to sell kayaks, but accessories it was off to the races showing them that yea you can sell a $1000 kayak, but here’s another $700 worth of stuff you can add to it, and if you sell one to a husband and wife, or two buddies there’s $1400 because nobody wants to be outdone with accessories. If the dealers start installing these products and making a few items themselves then it’s a home run for the dealer and buyer. One great thing about fishing from a kayak you can do it as simple or extreme as you want as long as you are keeping it within the weight restrictions of the vessel. The dealer makes more profit, and the angler is getting all their stuff at one spot. Afterward I answered some questions and then passed it over to Henry Jackson, and Hunter King. 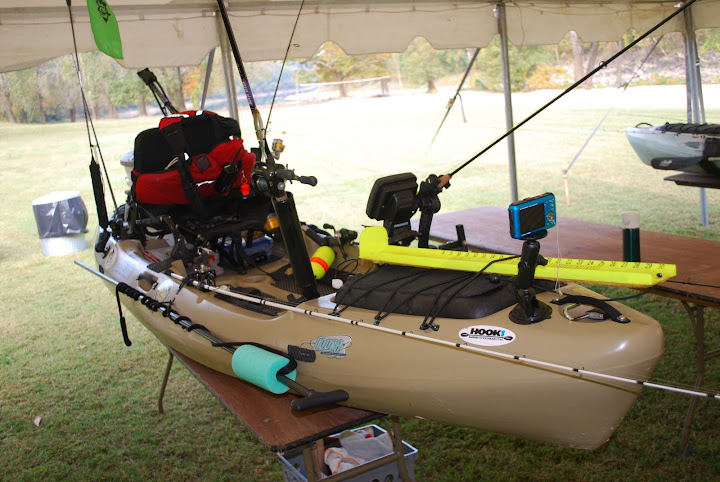 Henry, and Hunter did a very good job of talking sales bringing up some great ideas, tips, and innovative ways of thinking.

After the session the twenty people or so that were on the water came over to the tent to listen to us, and the people who were listening to us were going to hit the water  with Drew Gregory to check out the kayaks.

I want to thank Eric Jackson and Jackson Kayak for inviting and giving me the opportunity to speak publicly for the first time about something I have a great passion for. I really enjoyed it, and hope to be invited again to speak, or just hang out in the future.  I thank my sponsor HOOK1 they have given me great service, and products to be able to pimp my yak.

Afterward I packed up my stuff headed to the Jackson Factory where I ate a great BBQ sandwich with James McBeath a Muskie/Pike Specialist and whitewater paddler from the Jackson Kayak Fishing Team.

After lunch I had to make the trek back home, unload gear, and get a quick nap before heading off to the real job for another 12hrs.

The Next Generation of Fishermen