CBBT
I took the risk while knowing
it’s a heck of a long paddle out for a slim chance in the cold.
And the paddle back without a single tog bite
blows.
The HRBT light line held no love for me, neither.
And the kitties wouldn’t come out to play.
Some RVA shad found their way to my fly
But then over in Forrest Short’s fish bowl of gators n cows
I laid an egg.
Forrest didn’t do very well either.
So you know it was a tough night.
And then I retired that kayak. And got a new one. 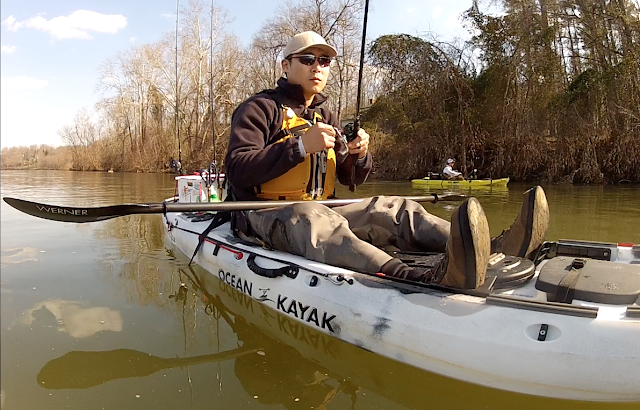 Which is basically the same kayak as before, just different colors.
I promptly paid Luther Cifers a visit at YakAttack Headquarters
and within 22 hours of being picked up
the James river was getting some grime and slime on the new Trident 13.
It was a little windier than I’d prefer, but it was still a nice day to be out and about.
Seth Goodrich and a few friends confirmed a hunch earlier in the week that the bigger smallies should be active.  However, this time the jig n’ pig wasn’t get the job done.  With the water warming up, I decided to pick up the pace and put on a bright skirt n’ willow blades.  It took a while, but I finally found the right current break.
The ambush came and it hit with a vengeance.  I was treated to two awesome aerial displays and a fight worthy of the smallmouth reputation.
Shortly there after, the sun dipped behind the trees and Seth scored on a lipless crank.

Smallmouth are a blast, but it is time to introduce the new kayak to my favorite pilings.  The CBBT awaits and as bay temps climb so does my need for tog.