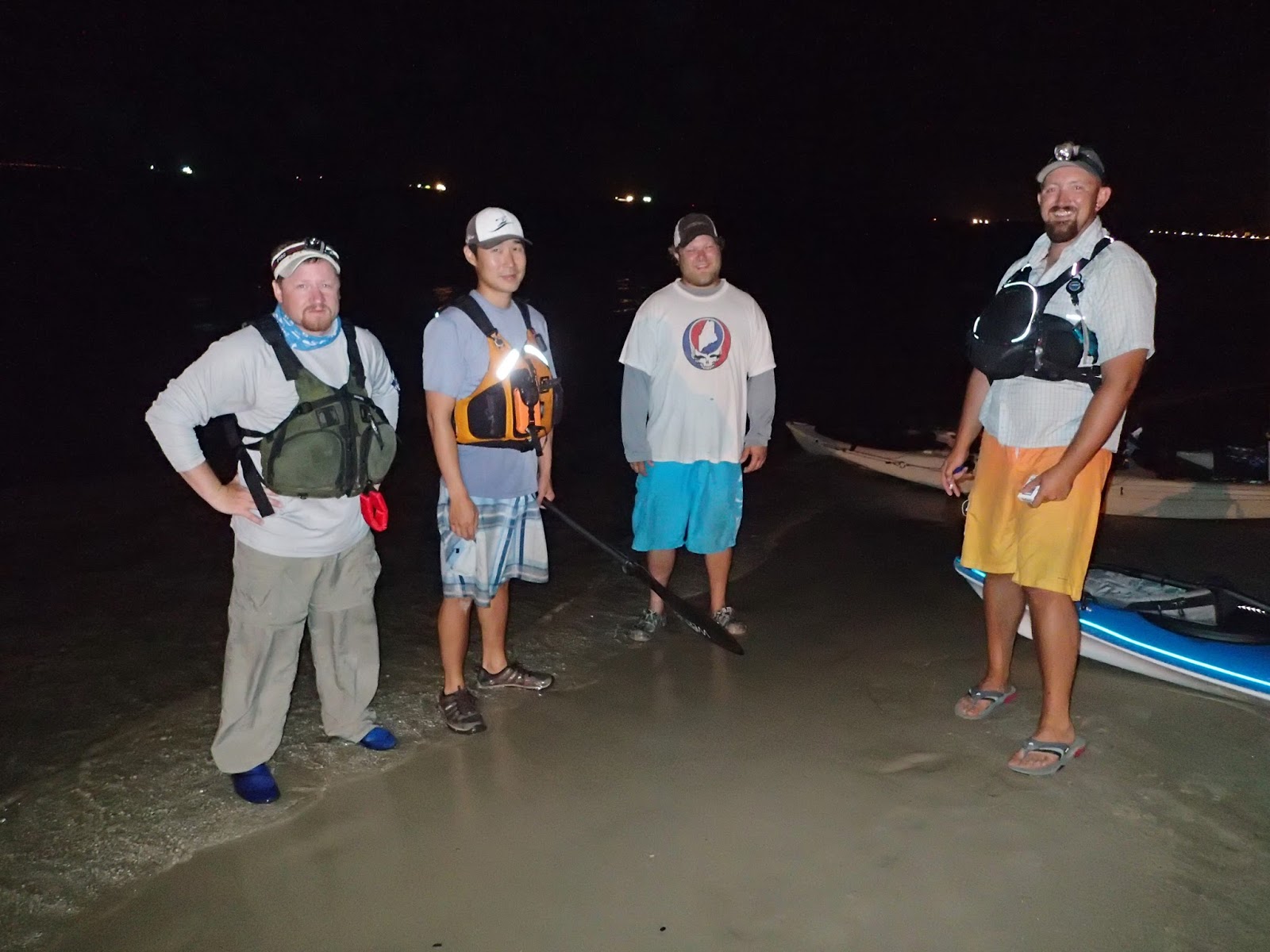 Some Sheepshead fishermen make it look so easy but I’m here to tell you; IT IS NOT!

I was introduced to Sheepshead fishing sometime in August of last year.  While at the Yakattack Tournament in 2012, I listened to Rob Choi share his excitement of catching the mighty Sheepshead. I knew I needed to get out there and give this a try.
I wanted to know everything I could so I could tackle these fish.
Where to start:  I read reports, blogs and talked to some of this sports best Sheepsheads anglers (in no particular order), Rob Choi, Kayak Kevin, Lee Williams, Jay Brooks, William Ragulsky, Matt Anderson, Seth Goodrich and Alex Britland. These guys consistently hookup with trophy Sheeps every year. I’m thankful to have had the opportunity to fish with and learn from these guys.
Well, little did I know that I was going to be in for a long ride. I have had mostly downs when it comes to Sheepshead fishing. I’ve had so many excuses about why I haven’t landed one. I was even getting sick and tired of hearing myself (and I know others were too).
These fish make some powerful adrenaline filled runs back to the pilings, immediately shearing my line. I’ve had fish right to the kayak and my 50lb flouro would just break. They will humble a fisherman quickly!
August 10, 2013 will go down in my book as the most stressful fishing day in recent memory!
I’m usually a pretty happy fisherman. I enjoy it when others around me have success. Today was going to be no different, I thought. Today was going to be my day; I knew I was going to catch the fish that has eluded me for 15 CBBT trips. Yes, this was my 16th trip dating back to August of last year.
Today I witnessed Jay Brooks land several fish in the 23”-25” range! William Ragulsky landed 25” and 17”! Alex Britland landed a 15”! Rob Choi landed a 26”er! I was happy for these guys but the truth is, it was tearing me up as well. Jay Brooks after landing his second fish paddled over and said “sorry bro”!
I realized that at this point they were all feeling my pain! Rob has been one of my biggest supporters in my sheepshead quest. If you’ve ever thought about sheephead fishing you can learn almost everything you need to know right here –> Sheepshead Tips and Rigs by Rob Choi
The day was quickly coming to an end. Rob and I were the last ones out when even he said he’d had enough.
I told him I was going to spend another 45 minutes or so. I just didn’t want to give up just yet. The winds and current were just perfect for this type of fishing and I didn’t know when I could get out again.
Well, wouldn’t you believe, it actually paid off! Only 20 minutes or so passed. I dropped a fiddler crab down next to my new favorite piling.  Immediately I felt that oh so subtle bite. I set the hook HARD. Then I made about 4-5 cranks before this guy went ballistic on me. He drove straight to the bottom peeling off the drag. I got him turned a little and got another few cranks on him. The next thing I know I could feel my line rubbing against the piling. I have learned from past mistakes that this is the most critical time in the fight. If you feel your line rubbing pilings, you immediately put your reel in free spool! This is so unnatural because slack line is a sure way to lose trophy fish.
Just remember this: Your line rubbing pilings ALWAYS trumps slack line!
When I put the line in free spool, I got my kayak turned around and headed right between the pilings after him.  Once through the piling, I reeled in just praying that the fish was still there. Once I felt that heavy line and pulled on the fish. He headed towards the other pilings. This time my kayak momentum was taking me away from the pilings.  I was able to get his head turned around. A few cranks and head shakes later. I landed my first sheepshead! A true Chesapeake trophy! 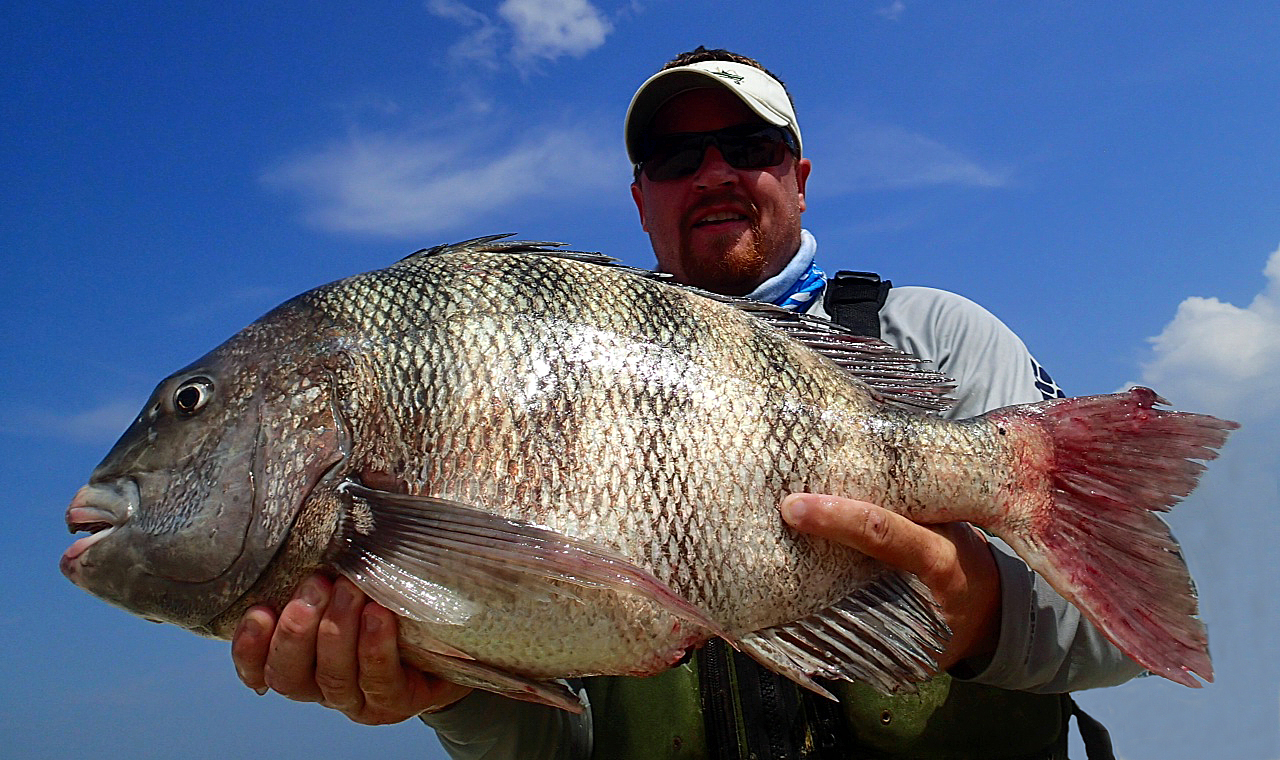 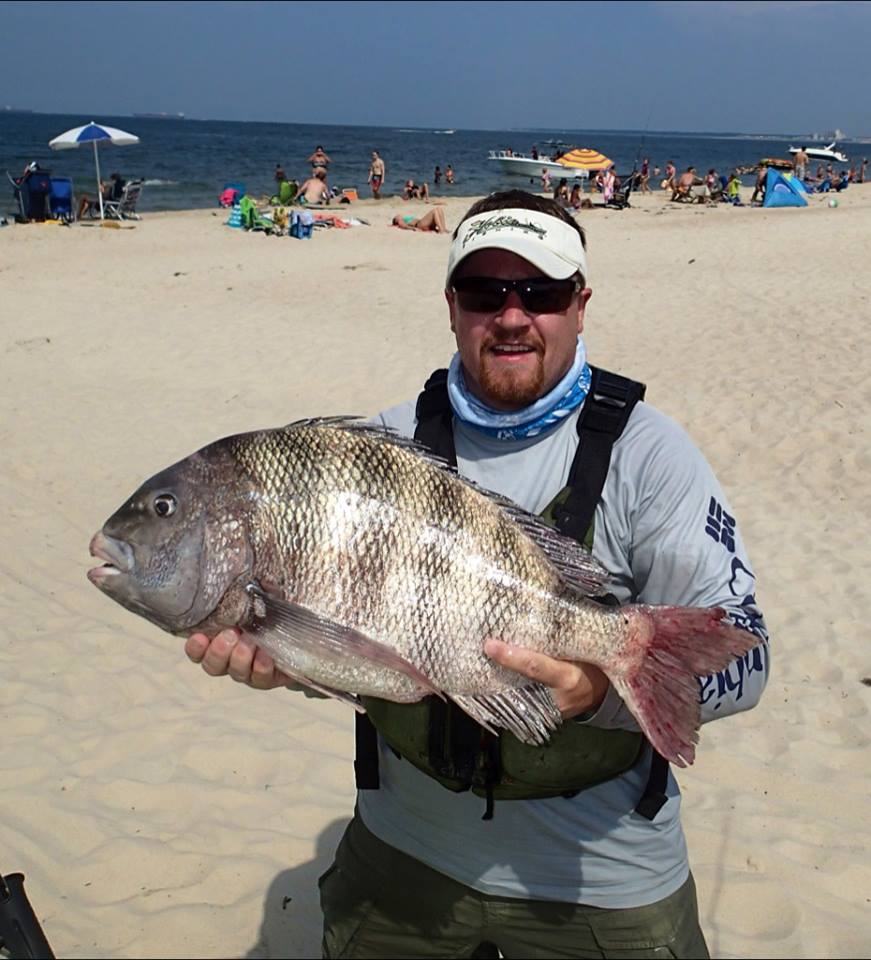 I would under normal conditions release this fish. However today was the 23rd Annual Angler’s Club Challenge and all the proceeds were to benefit the Catching for Kids Organization. This was a catch and keep tournament, so I took this fish to the weight in.
Eight fishing clubs from around the Virginia area entered the tournament.  It is comprised of mostly powerboat fisherman and TKAA is the only kayak club represented.
This was the largest Sheepshead weighed in and took First Place! This guy measured at 26” and 13.28lbs!
I feel as though a huge weight was lifted off my shoulders today. And I got to help my fishing club to their First Place Tournament win! 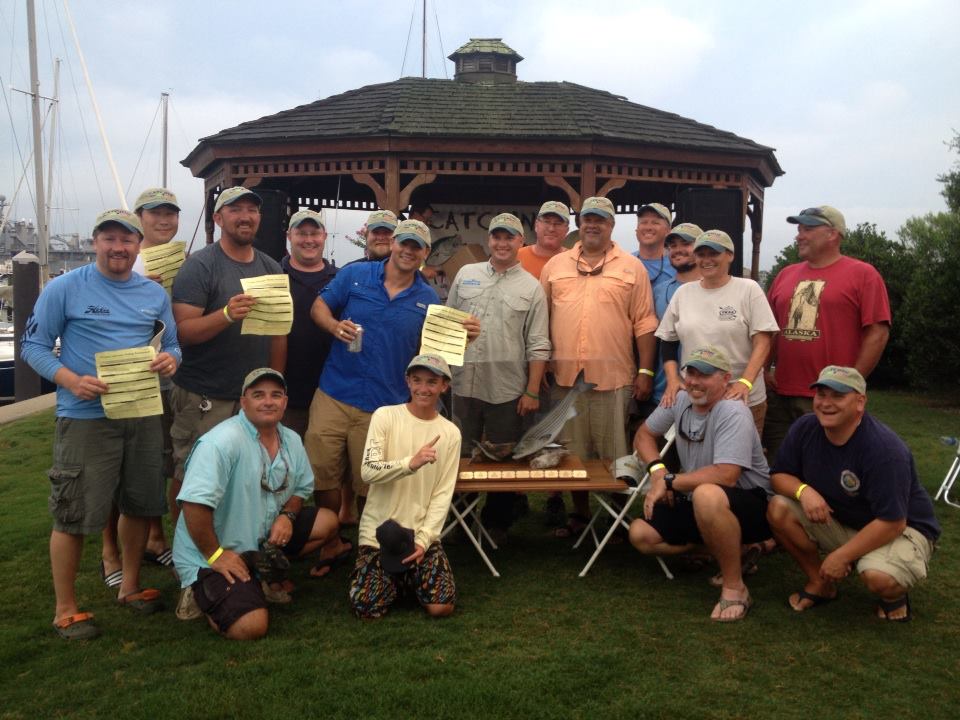 Congratulations to the TKAA Team!

One thought on “Chasing Trophy Sheep”