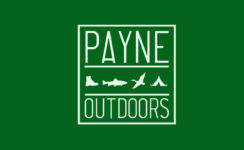 Pain racked my body like the slide of my Mossberg. The fever hadn’t gone away overnight, and the headache had grown to lengths yet justifiable by common measurements. And to magnify the crummy feeling, I’d had to cut my hair to look for a job; so I felt emasculated. But, this was the last day of the first split in Louisiana’s duck season.

And this old dog was gonna get out and get some action before it ended.

Getting up was the easy part; my new kitten, Bugger (named for the woolly bugger fly) had awakened me with licks and bats at the nose. The hard part was grabbing the shotgun, grabbing the box of shells, hooking up to the kayak, and easing into the seat of my Explorer. I was panting already. I was burning up.

Yet the air hadn’t warmed up like predicted. It had gotten colder. And my cold weather gear was stowed away. This was gonna suck.
Pointe Aux Chenes was becoming a virtual parking lot of mudboats, Go Devils, and Ford F-150’s. The parade of us hunters going down towards the WMA reminded me of wolves following behind the alpha, looking to score a big buffalo for food. But our buffalo were only about a pound in weight, covered in feathers, and either quacked or whistled.

I found my launch point, again off the side of the Island Road, and got the kayak loaded down. Since my last hunt, I had decided to change up my spread of decoys. Instead of just Game Warner mallards and pintails, I had bought some green wing teal. This time instead of a major split between species, I was going to put the big ducks together and the teal separated. I had read articles from Ducks Unlimited and other hunting forums that the more decoys congregated together the more likely they were to draw waterfowl in.

I found a pocket with hardly any water, which I thought would be good to restrict motorboats from getting to it. The decoys went out with only a few tangles in the cords, and before shooting hours I was in the blind. And even before they started I had two ducks fly over me. I knew it would be a good day.
I had put the kayak in a small mud hole, a few yards from my decoys. My idea was to get some distance from it since the Ride 115 has a shine to it that has made some birds flare. I got before the decoys and started calling.

About forty five minutes after shooting hours started, I had my first flock start working. Using my mallard call, I was able to get them heading toward the decoys. But here is where I messed up. I am still learning how to lead my shots, and I shot behind the birds this time. The pair sped off with the quickness, leaving me grumbling at my inability to shoot. To make matters worse, the temperature hadn’t warmed up like was supposed to. The 58 degree day my weather app had promised me was instead replaced with a 48 degree dreary day befitting the onset of winter.

And of course I hadn’t any of my cold weather stuff. Man, I had dropped the ball!

But, I soon redeemed myself. As I was reloading, a lone duck was flying low and fast right over the sawgrass in front of me like a chopper pilot in Vietnam. I grinned, and loosed a single blast. The duck went down into the water, the current beginning to take her. Upon retrieval, I was pleasantly surprised to see I had harvested a beautiful green wing teal hen. I put the boat back in the mud pit, and put the teal beside me in my hiding spot, getting ready for the next flight.

Another pair began working me. The hail and feed call were working their magic; a few quacks, a hail, some feeding, rinse, and repeat. However, they flared too early, and were right out of range when I fired two shots. Both missed (of course). And the spoonbills went off to live for another couple of hours at the least.
I was distracted by my phone for a second, reading an article on better shooting (I know, a sin in the blind), and the next thing I knew, I had a small fowl chilling across from my mallard decoys. I blinked a few times, shook my head, and downed the bird with one shot.

The tide had fallen several inches in the last hour, and I needed to get to this bird before the mud replaced the water completely. And it was a struggle. I got within twenty feet of the bird before I had to start scooting my kayak and rocking it forward as well as paddling. I was getting winded easily, and to add insult to injury, right as I started paddling back with my second green wing hen in tow, birds started working every which a way! But, none would come in range with my kayak sticking out like a sore thumb.

I got back to the hide sight, cold and tired. My fever was beginning to kick back up, and the sweat from working for that bird was making a bad situation even worse. As badly as I wanted to bag another bird, I was in no condition to stay in this weather. I sighed deeply, swore, and grabbed my ducks before getting the Ride back in the water, picking up my decoy spread and heading back to my truck.

Four ducks were my total for the half-way point in the whole Louisiana season. I knew that it sucked compared to most good hunters, but, I was thrilled. I was learning, I was succeeding, and I was loving my new hobby.