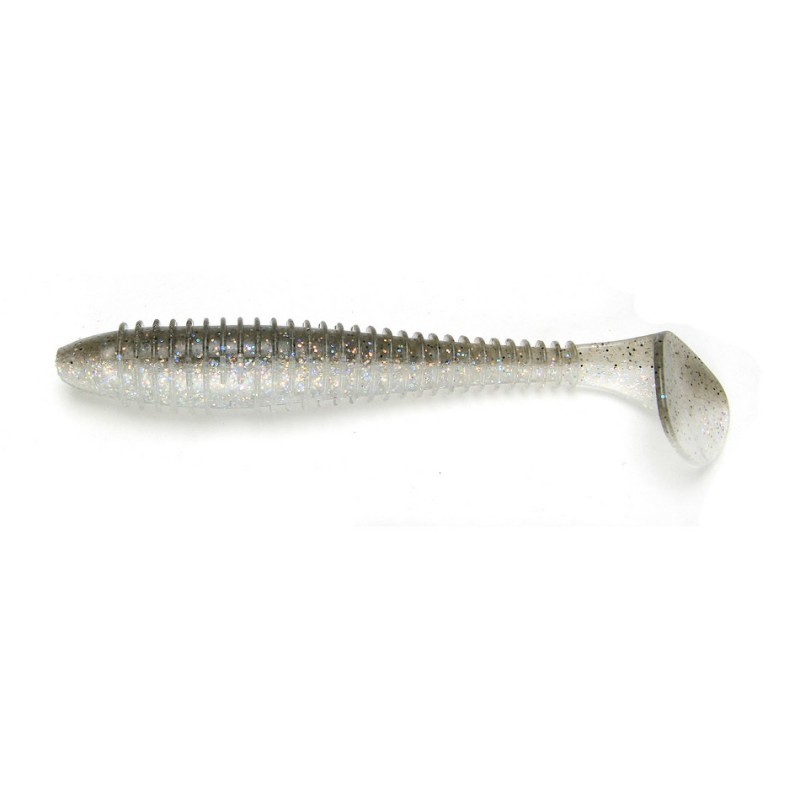 Without a doubt one of the best producing lures of recent memory (and one of the most hated as well!), is the Gary Yamamoto 5″ Senko. This is my go to spring and summer bait. It flat out works in just about any configuration you can rig a soft plastic. The vast majority rigs these wacky, which in and of itself is a fish catching rig, but for me, my most used rig is the weightless Texas Rig with a 2/0 off set hook.  The Texas Rig allows me to get my Senko deep into cover, where I like to fish, without getting hung up. I also have not noticed an effect on the fall, mostly because of the smaller size hook I use. The worm also give more of a bait fish swimming affect when reeling it in compared to the wacky rig, which just folds in half. You can actually give the Senko some quick jerkbait-like jerks while reeling it in to make it dart like a baitfish. I have had fish follow the worm in or hit it while reeling it in because of this. The Senko is my confidence bait and more than ½ of my yearly fish come on it!

Man, is there anything better than early Fall when the fish are absolutely hammering schooled up forage fish?? This is my favorite time of year and favorite bait to fish – Fall with the Adam’s Custom Lure’s Encount’r 75. This is a relatively new bait that came out in 2017, but it instantly became a staple in my arsenal. The 75 size perfectly mimics the schooled up bait fish that are common on many lakes this time of year and has a great side to side and quick diving action that gets it to depth fast. You can fish it slow or fish it fast. I typically start out fishing this bait fast in the Summer and early Fall when the water temps are still up. As the temperatures begin to drop I give longer and longer pauses between twitches and jerks allowing the bait to suspend in front of the fish for a longer time. This bait is made to suspend between 55-65F, but can be customized to suspend to your desired temps if requested. My favorite color in this bait is Northern Flash, which mimics the forage fish in my home lake perfectly. If you throw jerkbaits make sure to give the ENCOUNT’R 75 a try!

Sometimes there’s nothing better or more effective than simple soft plastic paddle tail. The Keitech Swing Impact 4″ is my go to paddle tail on both rivers and lakes. Their action is great as a sub-surface bait in the grass and lily pads for Largemouths or on a ball jig head slowly rolled across the bottom for Smallmouth Bass on the river. I like to rig this bait on a ¼ or 1/8 ounce ball jig head, cast it out as far as I can, and reel it back in as slowly as I can. I mean PAINFULLY slowly. The great thing about this bait is no matter how fast or slow you reel it in, the tail gives off great action. This means you can burn it until your arm falls off in the summer time heat or keep it dragging on the bottom like an injured or feeding baitfish. I have even fished these on a midwest finesse jighead in the river where the bait is buoyant enough to float the hook mimicking a baitfish feeding inbetween the rocks. This is a very versatile bait that can be used in a wide variety or areas to catch almost every kind of game fish!

4. The bait no one likes to admit they use – ZMan Finesse TRD Ned Rig

Yeah, yeah, we get it. You don’t use the Ned Rig because you use real baits and fish for real fish. Cool, but you’re really missing out on a very effective bait. Sure you’ll catch mostly smaller fish and have to cull through them to get to a larger fish, but don’t be mislead – this bait can and will put big fish in the boat. This is a numbers bait, and numbers is what it provides. You can easily have 100 fish days on this bait, and catch fish on literally every cast. Its a “do-nothing” bait that just shouldn’t work, but it does. The Zman Elaztech is some of the best soft plastic the fishing world has ever seen and holds up to fish after fish after fish (x20) better than any other bait on the market. It’s like they took Stretch Armstrong and made a bait out of him. The biggest complaint, as I stated above, is that the bait only catches small fish, but that’s just not true. I have personally landed multiple 17, 18, 19 and 20″ Smallmouth on the bait on tough days, and it rarely gets skunked. Sure, you will have days where all you’re catching are bluegill and sub-12″ bass, but hey, it catches fish. Add that to the fact that it is comparable in price to baits that simply don’t last as long and what you have is a great bang for your buck on a bait that works. The best way, and preferred way, to rig the bait is on the ZMan Shroomz jig heads which were literally made for the bait. There are some rigs out there such as the Owner Ultrahead Finesse that allow you to Texas Rig the bait to keep it from hanging up in cover and very rocky rivers. There are a few different ways to fish it, but the most enjoyable has to be the “do nothing” approach. Basically, cast it out, set your rod down and start eating lunch. But be ready, because you WILL have a fish on shortly.

5. The bait, the myth, the legend – The Whopper Plopper

I don’t fish much top water, but when I do, it’s the Whopper Plopper. One of the most fun baits to fish with one of the best names of any bait out there, the Whopper Plopper is a producer on the river that exploded onto the scene a few years ago. It’s is a great summer time producer of large fish and just a flat out fun bait to throw. It casts a mile and makes that distinctive “plop, plop, plop” as you reel it back in at a steady retrieve. Fish cant resist the bait, Smallies absolutely love it, and there’s nothing better than a top water explosion. This bait has been known to catch multiple fish on the same cast, and I have personally had multiple fish swipe at the bait on the same cast before hooking one. My favorite sizes to use are the 90 and the 110 and my favorite colors are Bone and Loon, thought I’m not entirely a believer that color matters a whole lot. The WP110 is a great bait to throw if you have any surface debris because of the redesigned tail section. The WP90 will tend to get hung up on surface debris, but if you have clear surface water the WP90 is a phenomenal bait. Each size has a distinct and different “plop” sound, so try each one and see which one the fish are in the mood for that day.