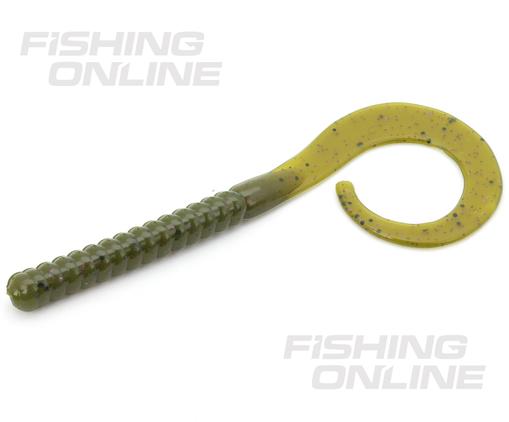 For the past couple of years I’ve fished a handful of baits from 412 Bait Company, owned and operated by Donald Corbett. I initially tried the brand because Corbett is a kayak angler, like me, and I wanted to support a small business with similar interests. What I discovered was a series of baits that have an edge in certain situations. One such edge is the new Illusion color that he just released in several of his soft baits.

The folks at Fishing Online were some of the first to receive the new color (and usually have the best on hand stock of 412 Baits) so I reached out and was able to order the last two packs of the 412 Free Worm in the Illusion color. A couple of days later I opened the mail to find my Illusion Free Worms and I wasn’t disappointed. The color is green but it has something mixed in with the green, a blueish purple flake, that looks pretty good. Then I held it up to the light. The bait took on a reflective hue and more colors started to dance out of the flake mixed in the bait. I couldn’t imagine what it would do in the water.

Fast forward to last weekend when I got enough time to go test some new gear, including the 412 Illusion Free Worm. The day started cloudy and overcast with clear water to almost eight feet. The temp would be rising through the day but it started out slowly. The fish would eat but were a bit sluggish around the smaller Free Worm. They wanted a bigger profile bait and the wanted it pretty fast. I caught four fish off of my favorite bank at the lake using a 412 Free Minnow in Watermelon Red. The Minnow, despite its name, has a five inch body that is considerably thicker than the Free Worm. The fish wanted the Free Minnow twitched like a jerk bait. It took about two hours to fish down the bank and about the time I finished the sun came out and the clouds cleared. I had a big high pressure front moving in and a barometer that was high.

I decided to start over, fishing the same bank, starting where I had previously, but to fish it differently. The fish were slowing on the reaction bite to the Free Minnow so I decided this time to fish the 412 Illusion Free Worm. I fished it weightless with the hook rigged Texas style. I rigged it up and dropped it in the water. As the sun hit it I could see why Corbett named it Illusion. The color of the bait changed in the water with sunlight hitting it. It has a ton of reflective properties. Fishing the same bank as before, using the Illusion Free Worm this time and working the smaller profile bait slow with a twitch and sink retrieve, I managed eight fish through the same stretch.

I don’t doubt I could’ve caught fish on the Illusion the first time through but I doubt as many. Something about the sun, clear water, and the Illusion really lined up and paid dividends. Do I think it will work as well in stained or murky water? Probably not. The Illusion, to me at least, is a sunny day, clear water bait.

It’s not a surprise that Corbett made a great new color and it won’t surprise me when other companies try to mimic it. Bluebird skies and clear water are a day killer for lots of folks but 412 Bait Co. may have just found the antidote.