At $799 the Bite becomes the new standard in “price-point” fishing kayaks in its class with the increased stability, better tracking, JK comfort and accessory versatility you expect in a Jackson Kayak without skimping on quality.

With the trend in price-point fishing kayaks tending towards compromise in hull quality, performance, gear management, and comfort, Jackson Kayak’s new Bite fishing kayak at $799 retail, doesn’t cut corners.  With an 11’3″ hull designed by Jackson Kayak’s top hull shapers and at a class-leading 35″ in width, the Bite performs to the paddle-ability and stand-ability standards you are used to in a Jackson Kayak.  It also is estimated at under 68 lbs with seat making it easy to manage in and out of the water.

The Bite’s comfort was not skimped on either with the addition of a brand new trim-able framed seating set up and plenty of room to stand comfortably.  The new open concept deck has been long awaited from Jackson giving the paddler ample storage space fore and aft of the kayak, supported by a system of touring-style bungee cords.  The deck will feature numerous storage placeholders for standard sized tackle boxes.

“This project has been the result of an exercise to keep the level of quality you expect to see in a Jackson Kayak but at a lower cost,”  notes James McBeath, Jackson Kayak’s Marketing Director.  “We didn’t want to leave our core fishing kayak values behind in this build.  We wanted comfort, paddling performance, stand-ability and immediate access to your gear.  The end result is a great all-around fishing platform that will be perfect for those wanting to get into kayak fishing, for those who wanted a lighter weight kayak and for those running livery or guiding businesses where quality is important.”

The Bite prototype is being displayed at the Paddle Sports Retailer show in Oklahoma City this coming week at Booth 705.

About Jackson Kayak: Jackson Kayak was founded in 2003 by Eric Jackson and Tony Lunt. Currently located in Sparta, Tenn., near the Caney Fork River, Jackson Kayak designs, builds and manufactures leading whitewater, fishing and exploration paddlesports products. With the motto “Build it like it’s your own”, all of their products are Made in the USA in growing support of the local Tennessee economy. Market leaders in both the whitewater and kayak fishing, kayak manufacturing and strong in the exploration sector, Jackson Kayak continues to introduce new product lines each year including Orion Coolers and, recently, Blue Sky Boatworks. Jackson Kayak’s success is largely due to delivering high-quality products through paddlesports specialty shops globally; all supported by regional, national and international team members who are engaged to promote the paddling lifestyle. 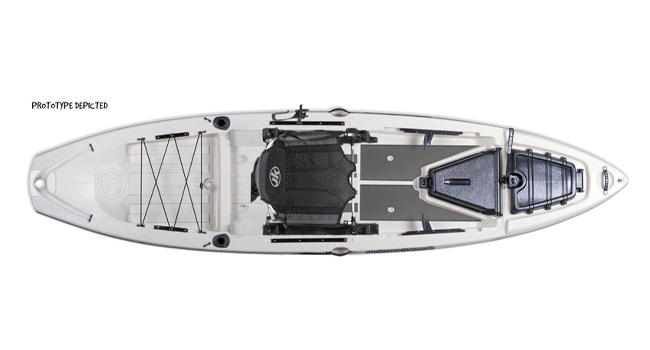