The Morons in My Fly Fishing Spot 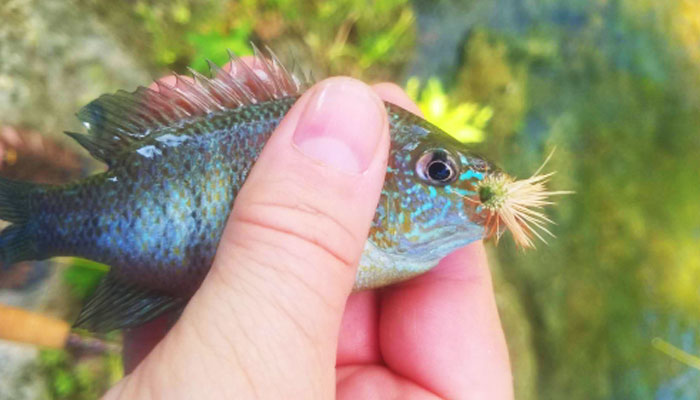 I called my wife from my little commuter car and did my best to muster some resemblance of nicety. By my tone, she knew it had been one of those days. She reassured me and I told her I’d be home in a few minutes, prepared for the fatherly duties that awaited me each day. I’d put on a smile, hug my kids, make dinner, and wait for bedtime to adjust my attitude. Things could be a lot worse. But that didn’t happen.

As I opened the door of the house, my sweetheart was waiting on me. She knew by my face I’d had a day of turmoil. Knowing I needed a chance to recharge, a small break from the norm, she recommended I go fishing. I weighed the options, put my desire to be lazy and self-loathing on a shelf, and made a plan to do some bank stomping with my trusty 5wt fly rod.

The creek I frequent isn’t a secret by any means but I rarely see people fishing it. The riverbanks are too close together and it’s pretty shallow but a few holes hold some fun panfish who always seem aggressive. I changed clothes, loaded the truck, and headed to the creek.

When I got to the parking lot, it seemed a bit crowded but I attributed that to the splash pad, park, and walking trails. I grabbed my gear, locked the truck, and made the quarter-mile trek to the water. As soon as I made the last turn, the foliage parted and there they were. About a dozen adults and kids, waist deep in my wading spot, were churning up the water, throwing rocks, and making my blood pressure rise.

The morons in my fishing spot should have known I needed this! How DARE they! A splash pad was 20 feet from where they parked but instead, they needed to F-up my night. A curse word, another curse word, one more curse word under my breath and a quick turn on my heel had me headed back to the truck.

Memories of Alexander and the Terrible, Horrible, No Good, Very Bad Day flooded my gray matter at the same time my grandfather’s voice flooded my head.

“Adjust; make a new plan. You never know what you might find!”

I didn’t need to fish in THAT spot. I really just needed to start casting my line and buggy whip the sucky day out of my consciousness. I checked a couple of spots that were both too shallow but the third spot looked money. A small riffle rolled past an eddy pool near a bank overhang. On the first long cast, I hung my bug in a branch up the river embankment and broke it off. (Curse word) I was over this day.

I had a decision to make at this point. Take the time to re-tie and do what I came here for or call it a day and go home mad again? I needed to calm down dammit.

Sitting for a minute listening to the water roll by I decided water therapy was important. Returning home pissed off was not an option. I dug around in my topwater bug box and decided on an Elk Hair Caddis. In my 15 years of fly fishing, I had only thrown the EHC once. It’s not flashy or fancy, just allegedly a workhorse. The line slipped through the loops, pulled tight for a snug knot, and with a clip was ready to throw.

I cast right back to the spot where my first fly had met its doom but this time, the EHC landed gently in the slack water. Almost immediately, a violent eruption had a hooked up pumpkinseed on the end of my line. The four following casts resulted in four more panfish. I could hear my grandfather behind me saying, “See. Told you so.” 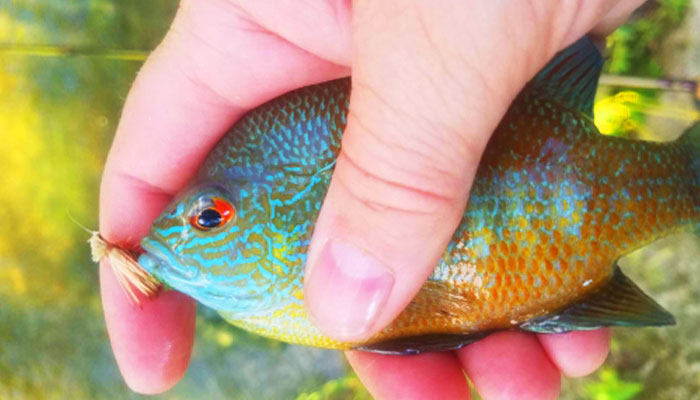 The morons in my fishing spot pushed me to try somewhere else. The gnarled tree above the eddy pushed me to try a different fly. The five fish who came to hand so quickly pushed me to calm down long enough to have some perspective. No one did anything to me. I chose my attitude all day. I chose to let oblivious bystanders control my emotion. I let situations at work dictate my current and almost future behavior and choices.

Sometimes, hell, most times, the best person to blame for what’s going wrong in your life is the person living it.

A door closed, another opened, and I had to have my grandfather there to push me through it. In doing so, I got a good lesson in perspective and the morons in my fishing spot turned out to be unknowing teachers, not morons at all.