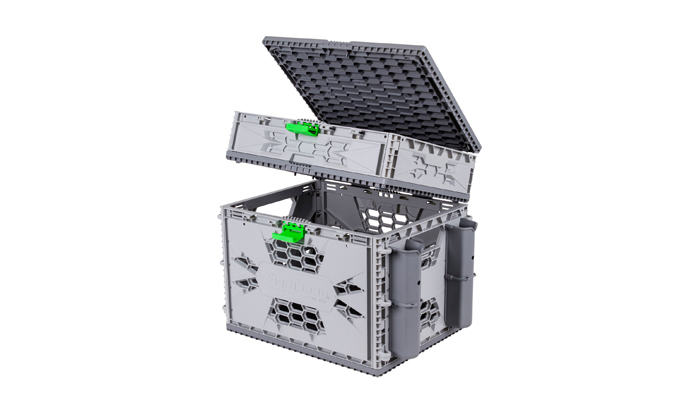 Flambeau introduced their Tuff Krate and Tuff Krate Premium last summer at ICAST and this winter they hit shelves for consumers. At first glance, it looked like a milk crate mod that had been around for several years but I’ll admit, I was curious. One of my fellow Heroes on the Water volunteers, Pedro, hit me up on Messenger letting me know he had a Tuff Krate Premium and was curious what I thought of it. I hadn’t seen the production model in person so Pedro offered to loan it to me to test it out and do a review. 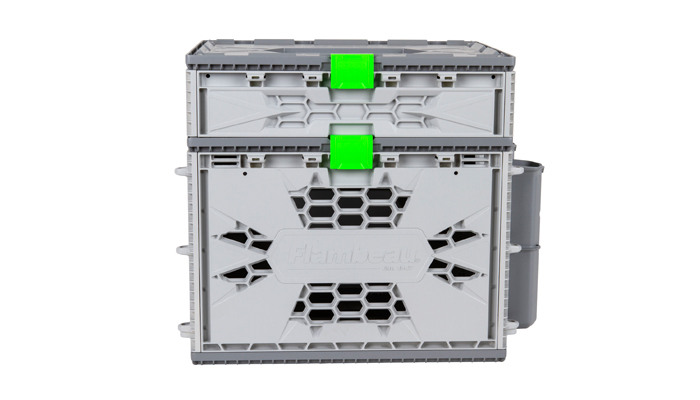 FREEDOM FROM THE NORM BY DESIGN. Purposefully engineered for the yaker, not the milkman. The Tuff Krate™ optimizes the customization possibilities for secure tackle organization and mounted accessory fixtures to enhance the freedom to fish.

Additional Info on the Tuff Krate I Tested

You’ll notice a couple of things in my pictures in the testing and garage environment that may not be included with the Tuff Krate Premium. I’ll make sure and point those out, I just didn’t want folks to assume everything they’ll see on Pedro’s Krate is standard.

The Tuff Krate Premium talks about Flambeau boxes and how many will fit. Not everyone uses Flambeau only boxes and the series numbers don’t match up to Plano boxes. Good news though, the bottom portion of the Tuff Krate holds the same volume as my BlackPak from YakAttack. In this picture you’ll see a double decker Plano box, three 3700 series boxes and a Flambeau Ike Quotient box I use for terminal tackle. These are the exact boxes I had in my BlackPak. (Green bungees not included). 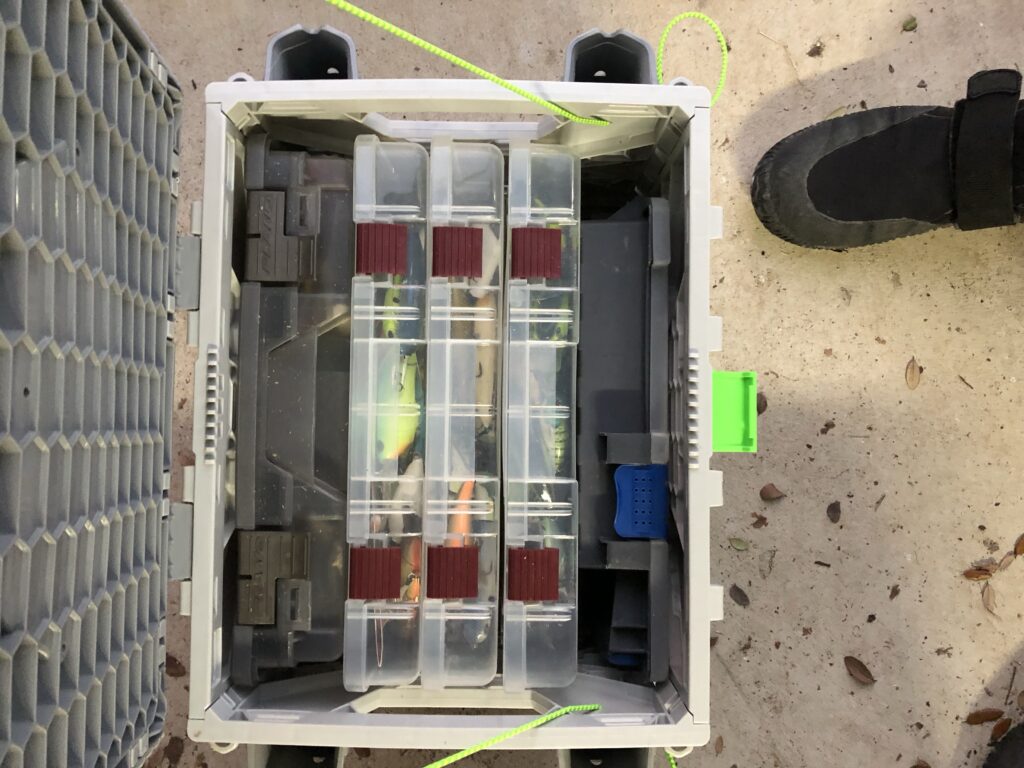 With the Premium Tuff Krate that isn’t all the storage you have either. The top deck stores a lot more stuff. I pulled all of my soft plastics out of the center hatch of my Outback and dumped them in the top. They all fit so I also threw some scent spray in too. This basically eliminated the need for a center hatch or worm bag full of soft plastics for me. 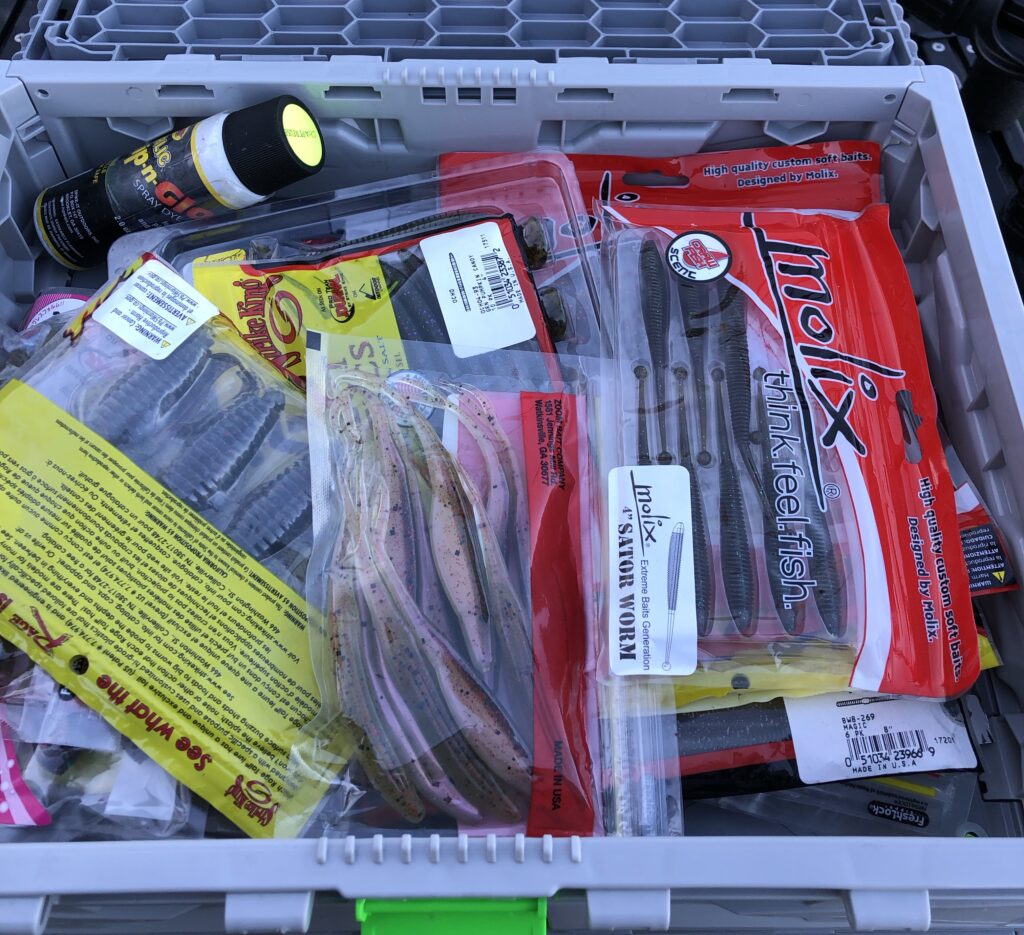 The rod holders are an interesting design that I was a little on the fence about however, with Pedro’s mod with a reel handle bungee, they worked well. The thing I like best was the attachment points didn’t protrude into the storage space of the lower box to impede easy box swapping. More on this later.

I was a little worried about the latch strength because they looked very similar to the latch style that is on some of the plastic lure boxes. While the TUff Krate was still loaded down with all my gear I grabbed it from the handle and walked around with it as I would loading or unloading. It held everything snug. 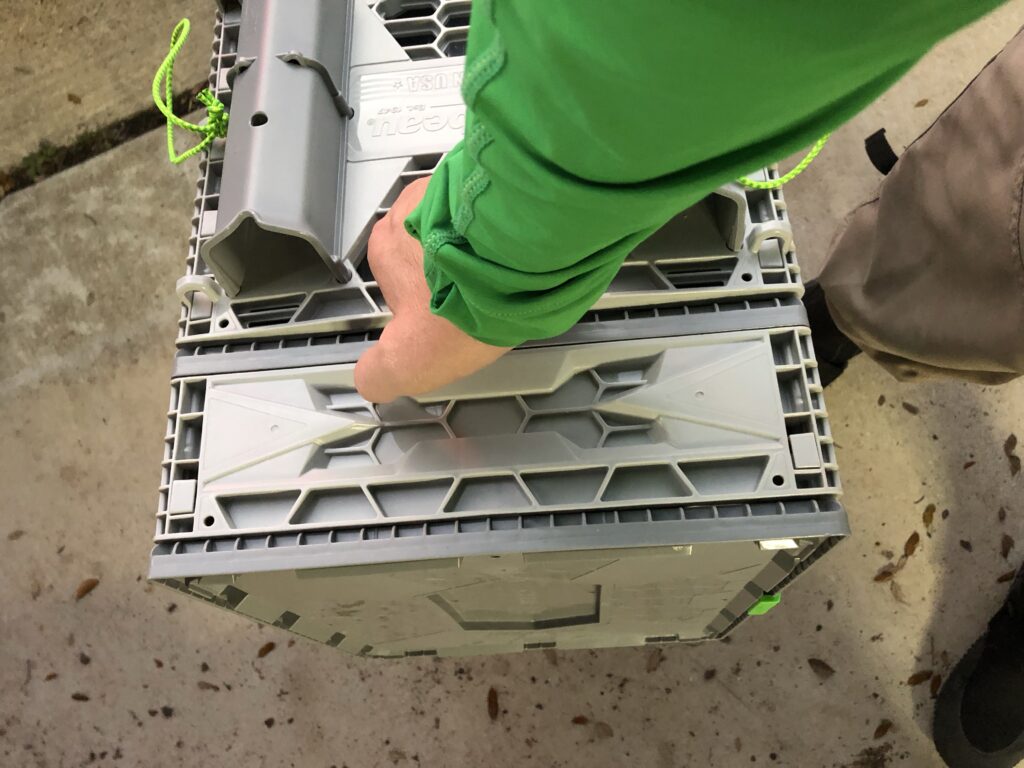 The Tuff Krate also seemed lighter than I thought it would. It’s lighter than Starboard but probably not as rigid. I don’t beat up my tackle management systems poorly so this was an acceptable trade-off and for those wanting to shed a little cargo weight, this should help.

The multi-level storage was nice and it didn’t stick up behind my seat as much as I had imagined. 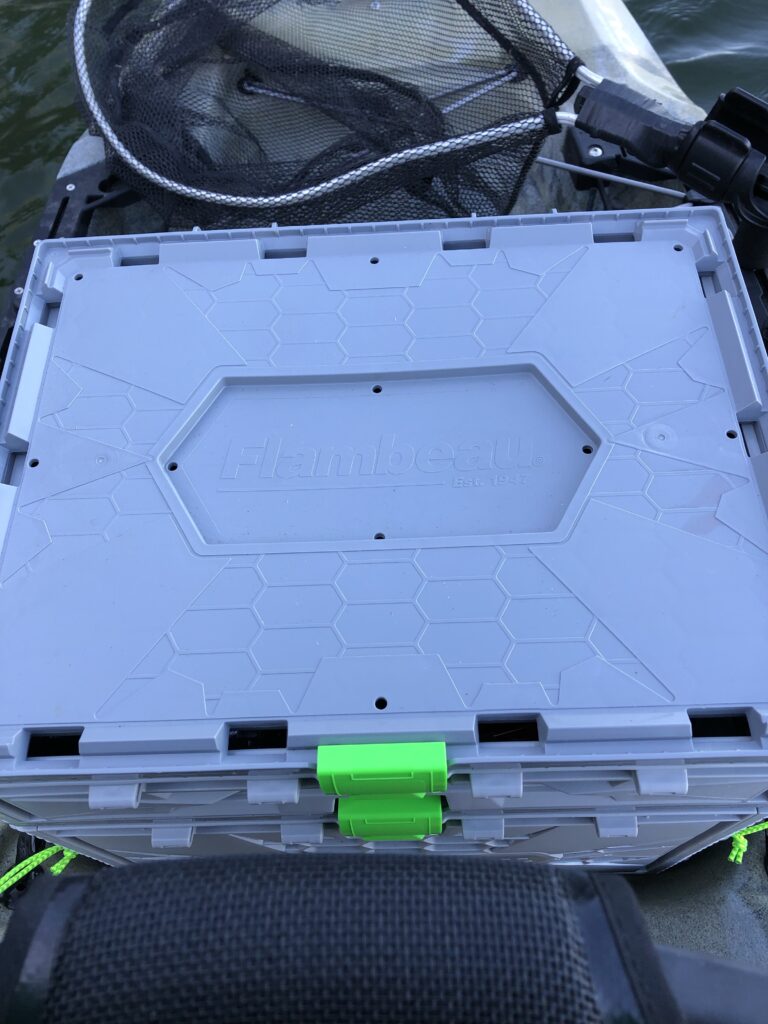 The Tuff Krate Premium only comes with two rod holders standard. Most kayak anglers I know carry three or four rods. It would be nice if four were included. While not convenient to have to buy an additional two, at least the pair or rod holders only runs $9. 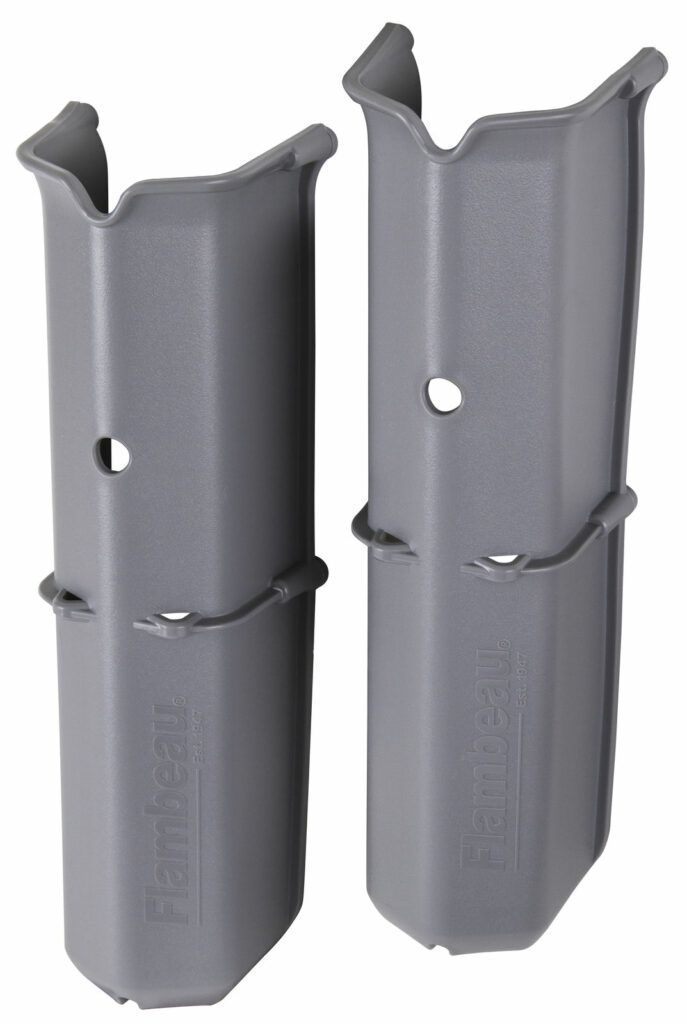 The Krate is molded with the idea that a lot of people will add reel handle bungees apparently because as you can see in the above picture, the rod holders have convenient places to throw a handle loop bungee. And speaking of bungee, I’d love to see some bungee attaching the top deck and Krate bottom so that the lid doesn’t just flop over. With all the additional weight from my soft plastics collection in the top, a few hard flops could cause some damage to the hinge holding them together. Pedro already remedied that too with bungees but a standard offering would help.

While the latches held in the sideways carry load test above, when I accidentally clipped one of the green latches on my tailgate, the latch flew off the Krate. A more secure latch hinge mechanism would be appreciated. And if not that, some spare latches to buy in case you lose one. 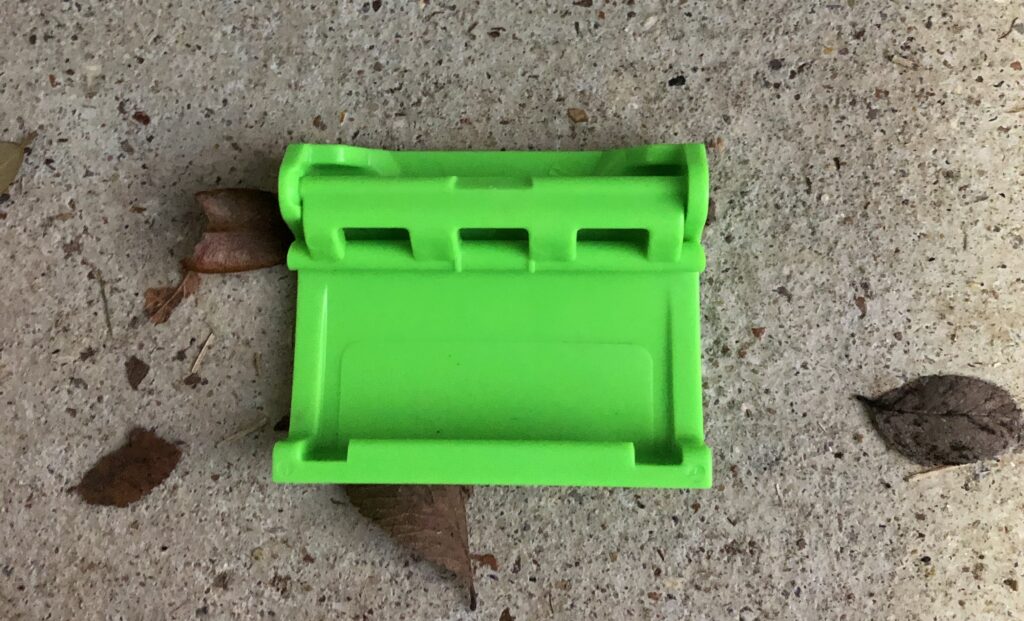 This is a hard decision for me. I’ve been a BlackPak guy since the outset but with a few cheap modifications, the Tuff Krate is really nice. I loved having the top deck area to stow soft plastics. I also liked the lightweight design. I’m still pondering what to do but if you don’t have money invested in a next level tackle solution, this is one you should check out. At $85 it’s a higher price point but less than the BlackPak though less rugged. It’s a great attempt by Flambeau to accomplish a design that’s useful but not completely monopolizing your tank well space (I’m looking at you Plano V-Crate).  If you don’t need a top deck or maybe just want to spend a little less money, you can buy a Tuff Krate standard for $35. That’s a smart move by Flambeau.