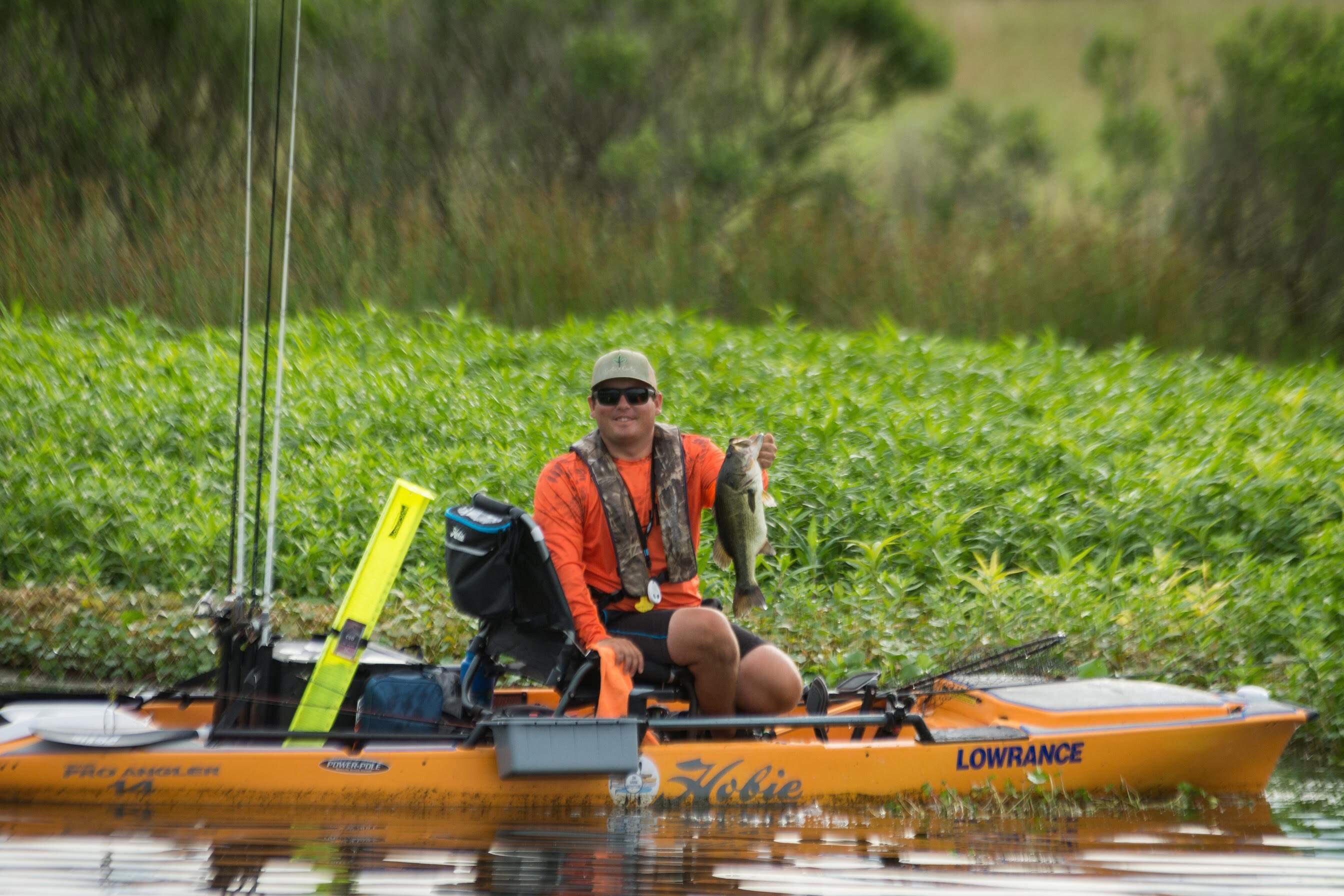 In this second installment of the Winner’s Circle, I am catching up with Matt Ramey of New Mexico to chat about his path to victory in the Hobie Bass Open Series on Lake Fork last week.

Ramey, a Fisheries Biologist and Project Manager who lives in Carlsbad, New Mexico made the 10 and a half hour trek to Alba, Texas to fish the Hobie Bass Open Series on a lake known by the world to produce giants. While many locals were thinking about fishing deep, Ramey stuck to what he’s most comfortable with, shallow fishing. While Matt has been known to throw a spook, what he prefers is not really a secret.

“I like a jig the best. Shallow flipping grass or in my home lakes salt cedars and rocks is what I am doing most of the time.”

When I asked him if he had a specific jig he liked, it boiled down to where he was fishing and what the water was like.

“In clear water lakes, I’ll throw a Strike King Bitsy Bug, something small for really clear water.” But there is a clear favorite when it comes to jigs he really loves: Ten Bears Baits.

“Ten Bears makes Tungsten and jigs. They have an Arkie style head that I really like because we fish so many rocky lakes. It’s definitely my go to.”

Fishing shallow is an interesting technique for June in Texas where water temps are often in the 80s by June. I wanted to get to the thought process behind it but before I even got to the when and where of fishing, Ramey’s background shed light on the way this all went down. Matt Ramey has a degree in Fisheries Biology from Eastern New Mexico University in Portales, New Mexico (Go Greyhounds!).  I asked if that meant he knew a lot about fish and if that gave him an edge and then he dropped the knowledge bomb.

“It’s not about fish as much as it is about water. I know a lot about water and what the water is doing. That helps me target areas and know what I’m looking for.”

Matt made the drive down on Monday and prefished Tuesday, Thursday, and Friday. The weather was uncooperative on Wednesday. On Tuesday he went right to where he thought the fish would be and caught a couple of fish fairly quickly and then spent the rest of the day Tuesday graphing the whole area, marking waypoints and looking for very specific features.

” I spent all my time during the tournament flipping shallow in the grass. A lot of these fish spend their whole lives in the grass and won’t venture off very far. I was keying on grass mats with a depth under them of two and half feet or more. The grass that only had a foot or so underneath just wasn’t productive. I also looked for deep water access points near the grass. After Tuesday, I didn’t go back to that area until the tournament. I spent Thursday and Friday looking for that deep water bite but it just wasn’t there. The fish were scattered. I’d see one or two but not what I was really looking for.”

Matt Ramey is no stranger to kayak tournaments. Matt is a co-founder and tournament director of  Eastern New Mexico Kayak Fishing and also fishes some tournaments with West Texas Kayak Fishing. His home base is Zia Kayak Outfitters in Elephant Butte, New Mexico, a Hobie shop which is his preferred sled of choice. This year Ramey is rocking a Hobie Pro Angler 14 in the Papaya color.

When I inquired about rods and reels that he used in the tournament he revealed he doesn’t have any sponsors so he just uses the right stuff for the right application. In the Hobie BOS he says his Dobyns Sierra 7’6″ flipping stick never left his hand. For flipping, he pairs the Dobyns with a Quantum reel. When he’s not flipping shallow grass, he usually has one of the Johnny Morris CarbonLite rods paired with either a Quantum or Shimano reel.

Matt Ramey spent his time at Fork doing what he felt confident in, what the fish were telling him in prefishing, and what the water around him was whispering. He didn’t try to force the deep bite but rather capitalized on a pattern that he developed from time on the water and a mix of science. That willingness to go with the flow rather than forcing a pattern paid dividends last weekend and no doubt will continue to pay into the future.