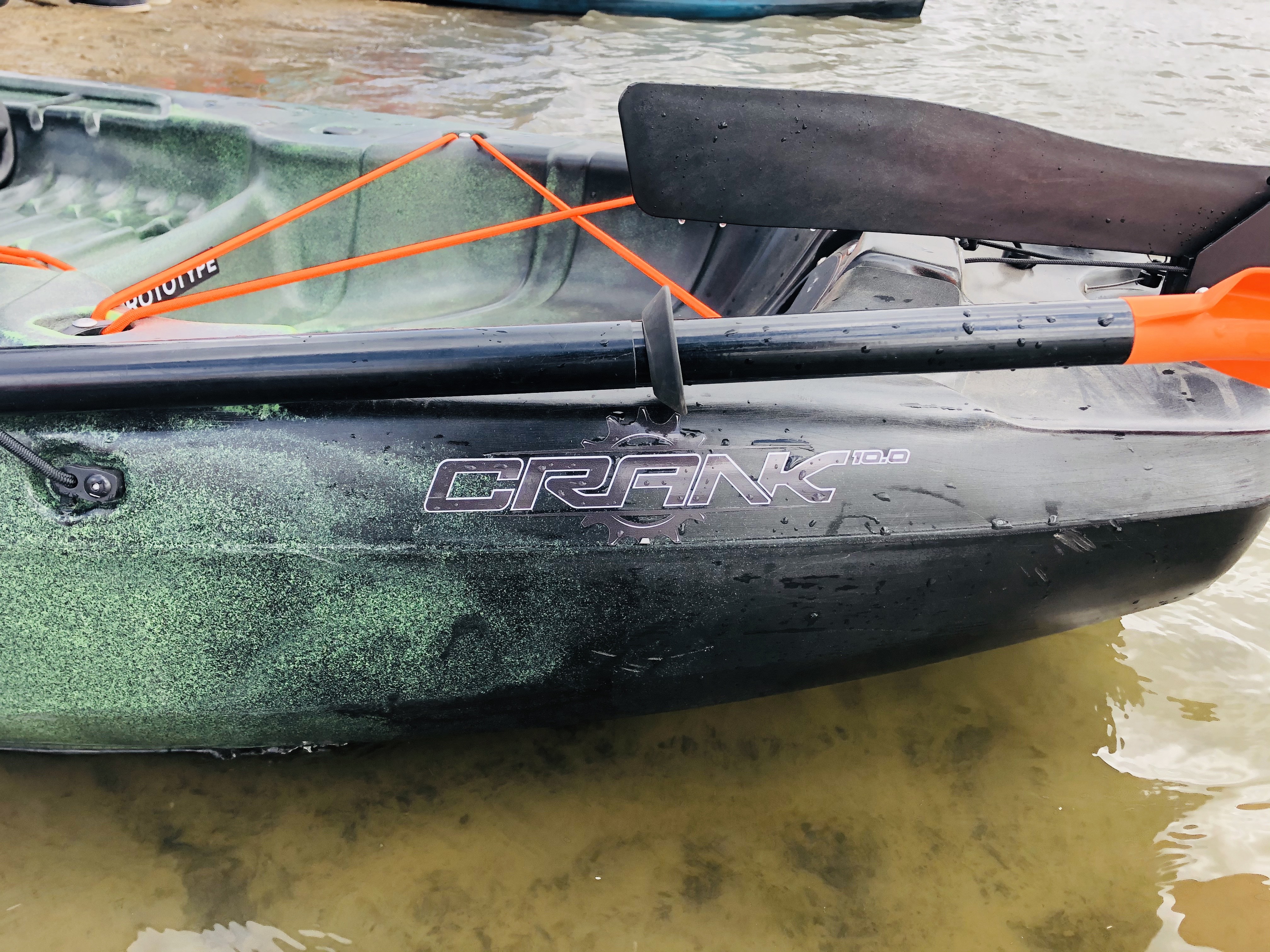 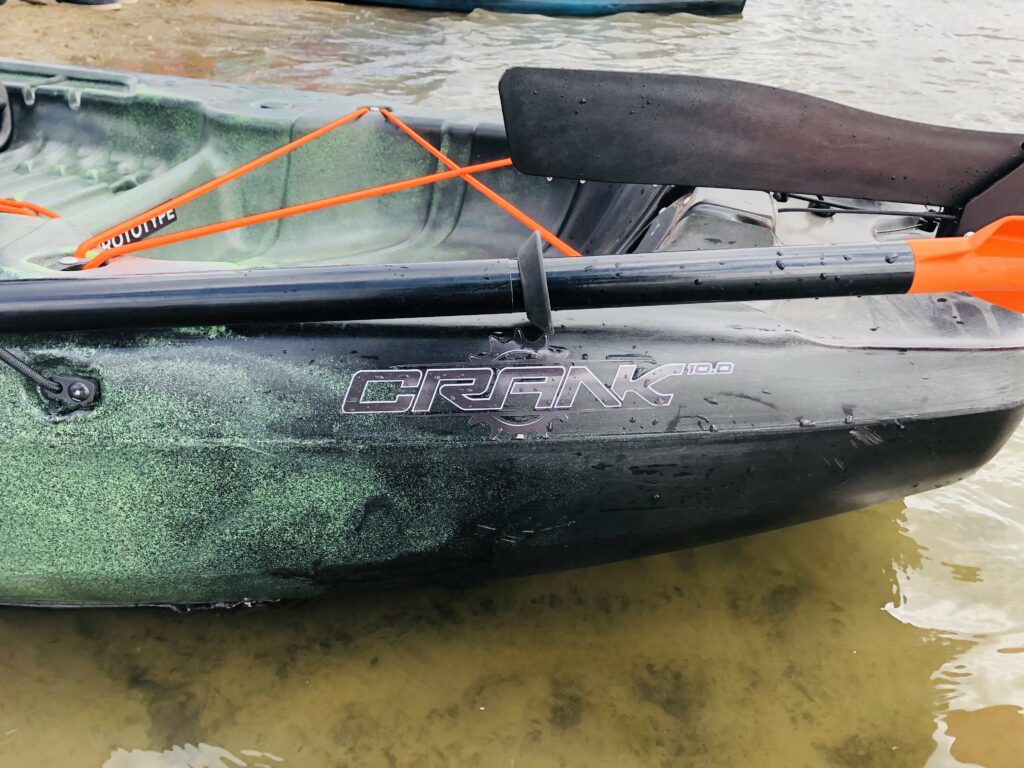 Looking for what’s new for next year but want to know this year? Let’s look at the Perception Crank 10.0 pedal drive kayak prototype. Due out in 2020, the Crank 10 is designed for more of a recreational pedal kayak. Signs are looking good for an angler version of the Perception Crank as well. And frankly, we know if it floats, some angler is going to rig it for fishing.

Not only did I get to check it out in person, but I also got the opportunity to get the Crank 10.0 on the water and give it a spin. I’ll give some feedback as we go through but please keep in mind, this is a prototype kayak. Many things could be tweaked, changed, added, or omitted before the Perception Crank hits shelves. And since I know you are going to ask, the MSRP is going to be $1399. 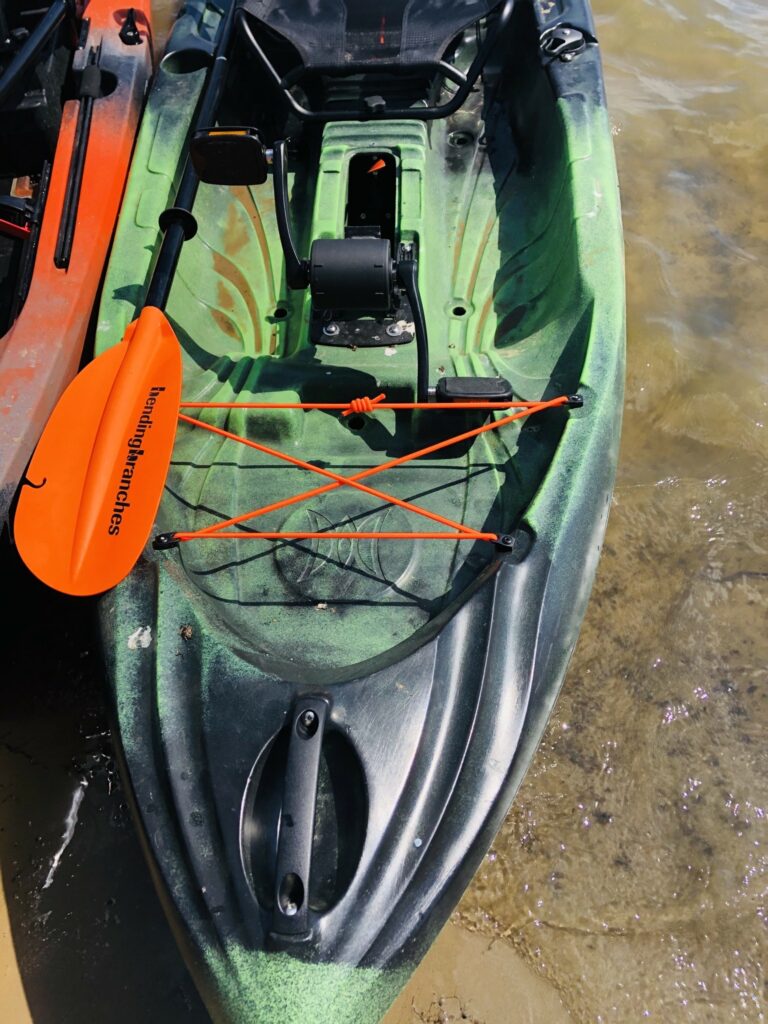 Since the Perception Crank is really made for recreation, hatches so far are limited. It’s 10 foot long size also limits surface area for big hatches. For a trip on the lake you have some bungees up front to hold down a small cooler, a small tackle box or two, or some other item you want to make sure doesn’t go swimming. The solid handle is nice as it gives a reinforced pull point for portaging or loading/unloading. 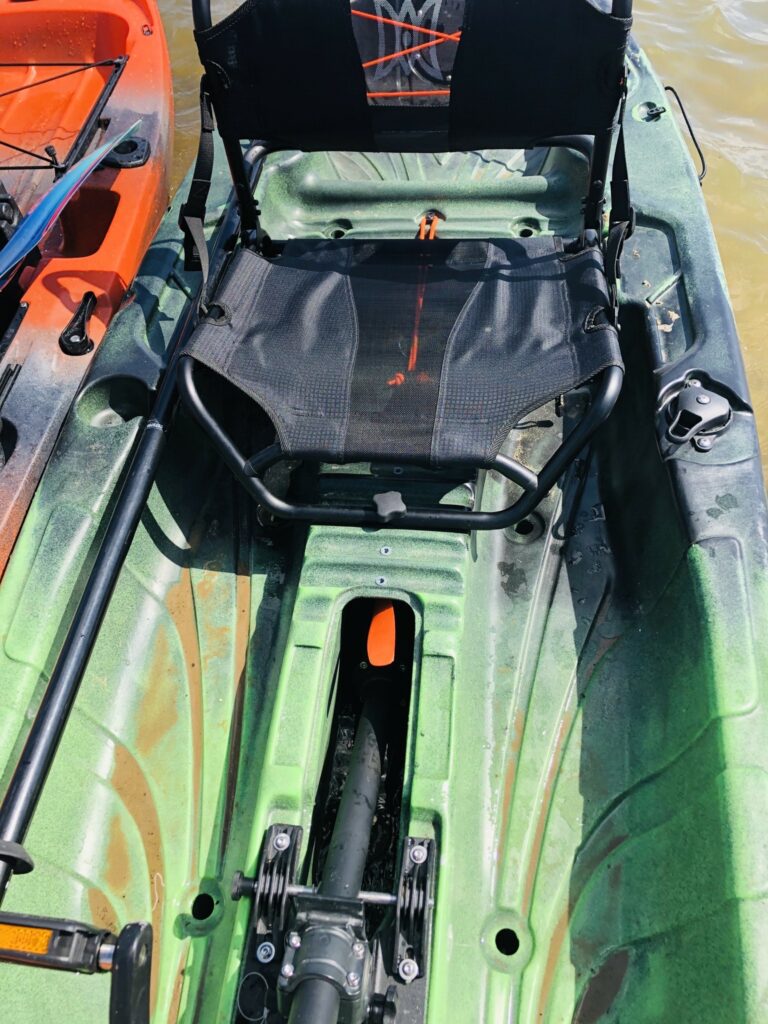 The Crank 10.0 will have a frame style seat. It might be this one or a slightly wider based model. The seat adjusts fore and aft and is secured in grooves with a single inset. I really hope they redistribute the stress and backward torque on this single point by either making it two points of connection with the same knob screw or even widening the center channel, widening the chair base, or making different connection points. I have some concerns that the heavier kayakers might pop the insert out if it’s just one.

For the Crank pedal drive, the Pilot Drive has been modified a bit but the prop style and gear ratios seem to be very similar to the Pescador Pilot. Being in a 10 foot kayak, the pedal drive really moves the Crank through the water. I’m hoping they deepen the deck about an inch. Pedaling with my size 12 feet I would drag my heel a bit unless I moved the pedal pad up to the arch of my foot. I normally pedal with the pad on the ball of my foot. Folks with smaller feet won’t notice any issues as it is.

When the drive is stowed the Perception Crank moves through the water pretty well. It’s a lightweight craft that has more of a paddle style hull as opposed to the normal sluggish hull in most pedal kayaks. 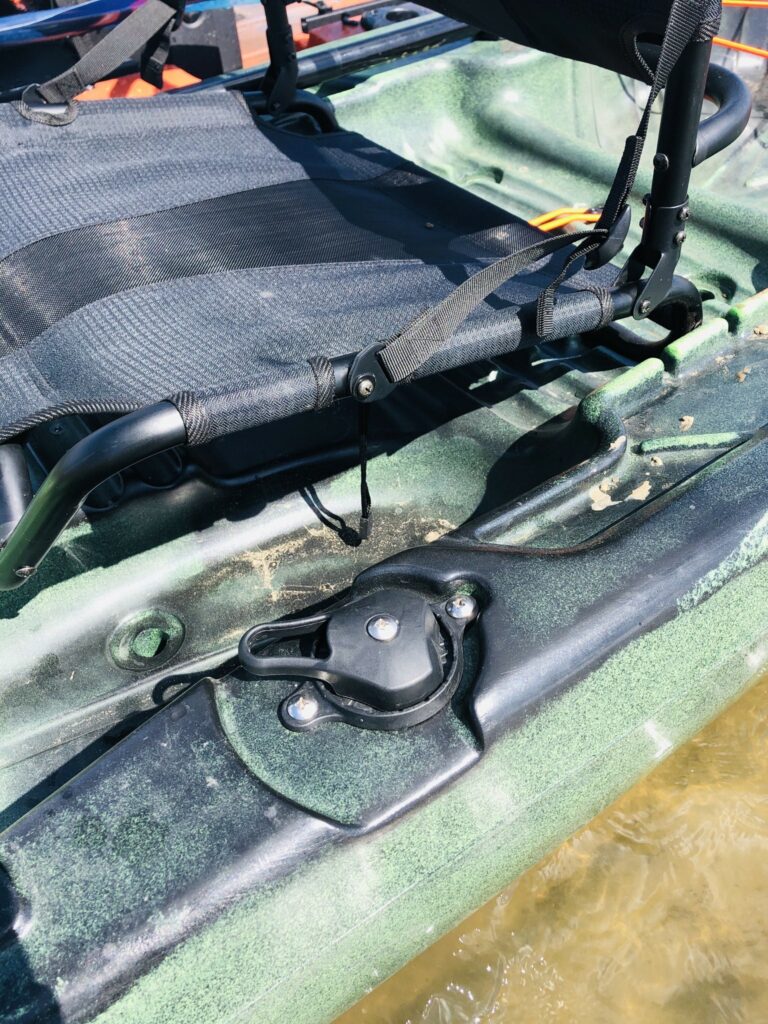 The rudder control is fine if you only use a finger to turn it but for folks with a large-sized hand, I’d recommend a taller rudder control or a longer lever. My hand easily covered the whole mechanism. A shifter knob style would be an easy fix to make it workable for all hand sizes.

A milk crate sized tank well with a rear access hatch is a nice addition to this rec kayak. Add in the Solo Ports already in the prototype and I’m thinking this may be fishable as is for a lot of folks. That offset handle and rudder configuration may be telling secrets as well. Let’s look at it from a different angle. 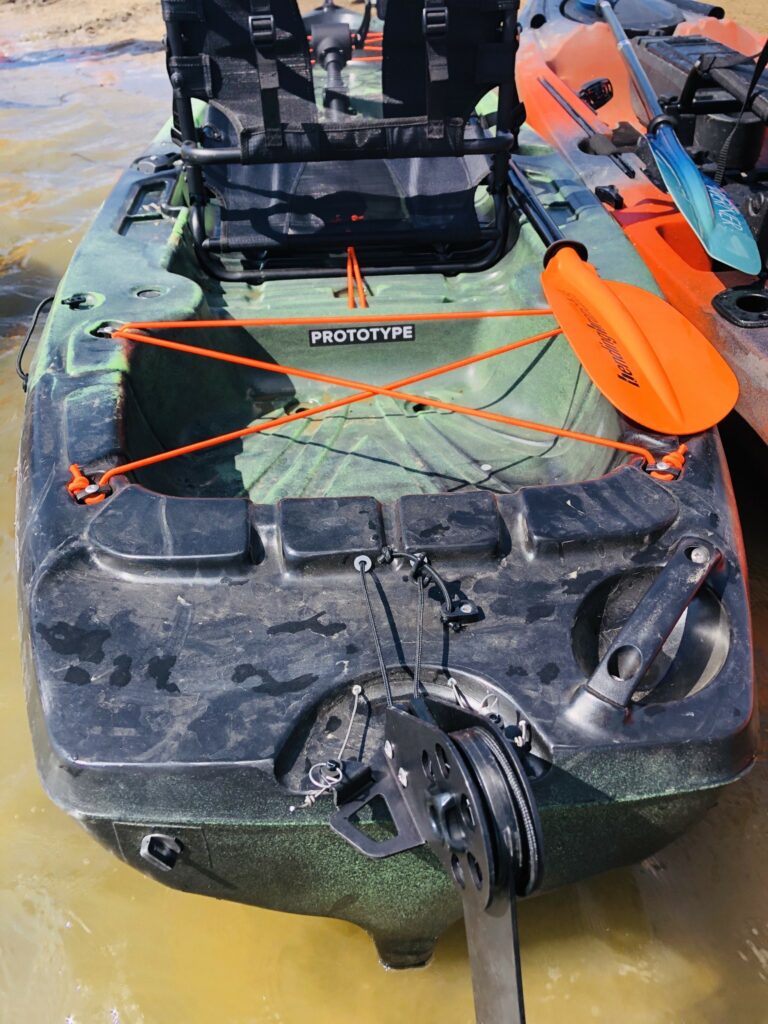 With that much real estate on the left, I’m thinking this may be a potential place to mount a Power Pole or trolling motor. I’m not crazy about the offset rear handle but I’ve seen that in several models lately. The rudder is the reliable rudder that Confluence boats have been using forever and if you look carefully, there is a replaceable skid plate on the keel. 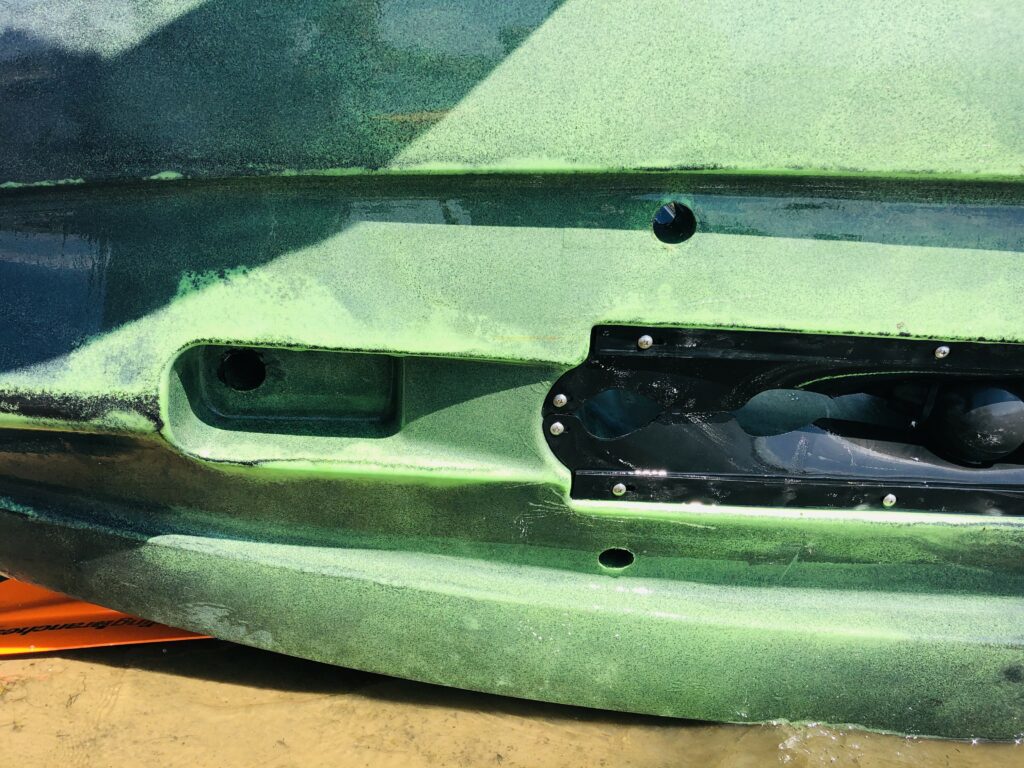 The last clue that tells me Perception knows anglers are going to fish in the Crank 10.0 is the recessed transducer port on the prototype. It’s ported and everything. On a prototype. Yeah, they totally know.

The Crank isn’t going to win any races but it is going to be another pedal kayak that is able to be paddled without rotator cuff surgery afterward. Some very cool layout is leaning in the right direction to make a really cool little pedal craft. A couple of tweaks to the seat, rudder control, and a slightly shallower hull would set this up as a great pedal entry option for a lot of folks. I’m looking forward to trying a production model next year.