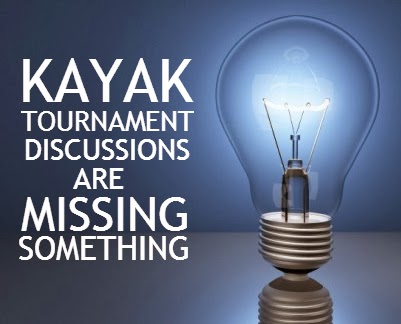 Amongst all the banter back and forth about tournaments this month, a valuable piece of tournament fishing is being lost. Winnings, camaraderie, food and fun are all reasons people fish in tournaments but one I think is often overlooked. As kayak fishing blossoms into a nationwide and worldwide sport we are failing to recognize this one thing: innovation.

Kayak fishing isn’t the first to go through this stage and won’t be the last. When Ray Scott first launched the idea of competitive bass fishing in June of 1967, he saw innovation and adoption immediately. In an article for Texas Parks and Wildlife, Scott talked about it:

“One boat had the trolling motor mounted on the bow instead of on the stern, where everyone put them in those days,” Scott says. “People were standing around in the parking lot looking at it, and the owner, Stan Sloan, explained that he figured it was easier to pull a chain than to push it. Sloan won the tournament, and at the next one, all the trolling motors were on the front. I realized we don’t learn new things from our usual fishing partners.”
That’s an interesting thought. When I think about how I have rigged out my kayaks, it is from seeing new kayaks at events like tournaments and get togethers. Others have also looked at different ways I have modified and rigged my kayaks to get ideas. As the cycle of ideas goes around, improvements are made and ideas are hatched. Sometimes these ideas are picked up by manufacturers and they can then mass produce a finished product for everyone to enjoy. Sometimes it becomes a DIY project that is adopted by thousands. Seriously. How many of you have looked at the plans for the PVC cart on the Palmetto Kayak Fishing website? How many of you have made it or a variant of it? (I first saw those plans after I saw one in person when fishing with new friends. They referred me to the site.)
We can get referrals and ideas from the internet but it really doesn’t take on that super cool / gotta have it fever until you have actually seen it in person. Then, at those gatherings, we decide whether it’s worth trying.
Kayak tournaments won’t be going away, love them or hate them. A great benefit of them that no one seems to be talking about though is innovation. Keep an eye out next time you are on the water.You just might see something that could help you out.

One thought on “Kayak Tournament Discussions Missing Something”