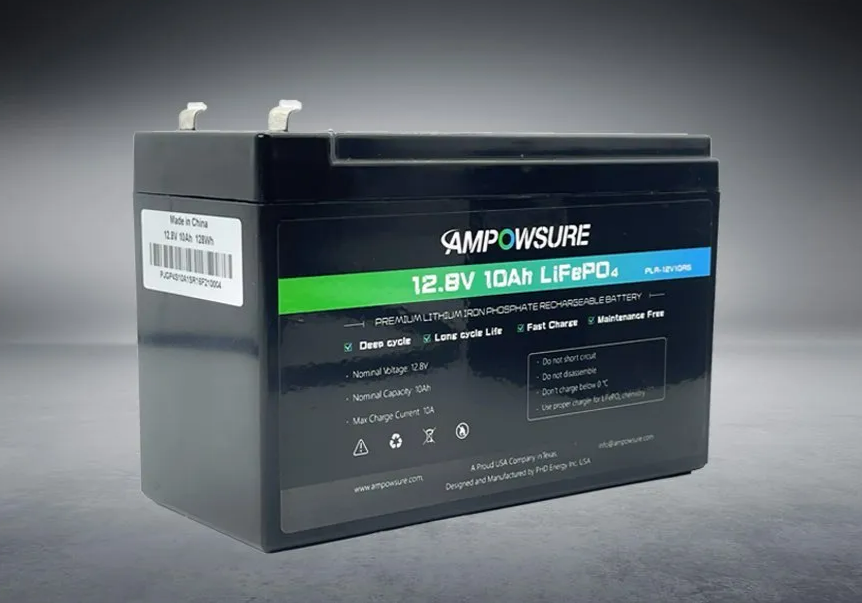 The outdoors industry has been flooded over the past few years with new battery offerings that are lighter, longer lasting, and better performing than the age old sealed lead acid batteries. Most of these batteries are Lithium based. As a user of SLA batteries for years in my kayak to power electronics, I’m always down to shed some cargo weight as long as the batteries do what they are supposed to do. First up in our Lithium battery test is a 12v 10ah Lithium Iron battery from Ampowsure Lithium Batteries. The story of the founder was intriguing and what ultimately helped me decide where to start when looking at Lithium battery solutions.

About the Ampowsure Lithium Battery Founder

As a Lithium-Iron Battery Technology Ph.D. degree holder and enthusiast, Dr. Michael Xie, the founder of Ampowsure, has always made sure he brings the best battery technology and products to the public. Michael spent eight years in R&D of Lithium battery technology, five years doing his Ph.D. research, and three years working for Nobel Prize Winner Prof. John Goodenough (known as the “Father of Ion Batteries”) as a postdoc at the University of Texas. Michael believes that the cost of Lithium batteries should not be as high as most companies promote their product in the market, while also making sure a better battery quality is maintained. Therefore, Michael is providing a better solution for the Lithium battery industry so that more people enjoy the benefits and high power of a Lithium battery.

Let’s talk weight. I have been using two SLA deer feeder batteries in my Yak-Power battery box for a few years. Advertised specs on that setup is 12v 7ah per battery or a combined 12v 14ah. When I talked to Michael he explained that with charge degradation and recharges that I should be able to get the same performance out of one 12v 10ah Ampowsure Lithium battery. He’s the expert so I went with that for testing purposes. I reduced my battery box weight from 10.6 pounds to 3.2 pounds. That’s a big win already.

Next up was to run all my lights and electronics which I know have a cumulative 1.2ah draw for as long as I could without a recharge while on the water fishing. With the SLA batteries I would lose juice at 7 hours for a total actual performance of 8.4ah rather than 14ah. With the Ampowsure battery I fished 8 hours and still had power when I left. That’s at least 9.6ah. When I factor efficiency versus advertised amp hours (ah) the SLA batteries were at 60% and the Lithium battery rated at a minimum of 96%. Age of the battery factors some here as SLA batteries degrade over time and have between a 18-24 month half life.

Though it’s not often talked about in battery evaluations and comparisons, I want to mention quality here. The manufacturing of these batteries is impeccable. All of the seams are flawless, the connection points very secure, the seal is tight with no gaps, and overall quality is top notch. I have seen other companies who skimp on the QC and put out batteries that I would be worried about to run on my kayaks.

On the 10ah Ampowsure battery specifically I would like to change the spade connection size. In most batteries this size, the positive and negative connection spades are 1/4″. In the Ampowsure battery they need a 3/8″ disconnect. Why is that important? Battery boxes are designed to accept the 1/4″ size and prewired with 1/4″ disconnects. To use my box I had to modify it. It’s also not super easy to find 3/8″ disconnects. Drop it to the 1/4″ size for the 10ah battery.

Chargers. Why are they separate and so expensive? In the battery industry, if someone wanted to corner the market, they’d package batteries and chargers together as a bundled deal with savings and own the market. Ampowsure runs $95 for a 12v 10ah battery. Other well marketed companies charge between $99 and $109. Chargers run between $79 and $99 for these as well. Modify the margins and make a mint. Sell a 12v 10ah Lithium battery with a charger for $149 and I’d bet you see you make up in volume sales what you lack in per unit margin.

I’m very pleased with the battery from Ampowsure. It does exactly what it says it will. The design is well executed. I also really appreciate the fact that an expert who trained with a world renowned expert developed these not just to sell a product but to sell a better product at a better price. You should definitely check them out.