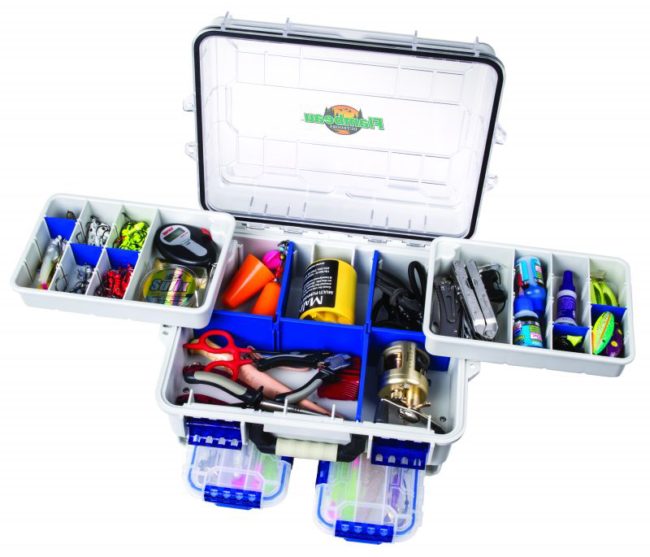 As anglers, we go through phases. For me it is usually phases of taking lots of tackle and then the opposite, which is taking only what I need. A downsizing if you will. I’m in the downsizing stage now and have been spending some time with a new product from Flambeau.
The Flambeau Waterproof Satchel with Base Cage is:

The Flambeau waterproof boxes are pretty decent. I worry that the latches might work free off of their hinge over time but they seem pretty tight right now. That’s a good thing. The non-waterproof Zerust boxes I’ve owned in the past had the latches fall off almost immediately and for kayak fishermen that’s a bad deal. I was happy to see a much stouter latch system on the waterproof version. For the price point, it’s probably the best it really can be and none of the competitors on the market have a fool proof latch that doesn’t give way eventually.

I appreciate that I didn’t need a pair of scissors and have to do a craft project to set up my dividers. One of the biggest gripes I have with boxes is having to cut and then widdle down tabs on dividers to make them fit properly and get a good seal when the box is closed. I don’t want mixed mingling of my tackle, especially things like terminal tackle.

On the Flambeau 3000 series satchel I like the swinging trays. Something I did notice is that if you put another box below the swinging trays you have to completely open both trays to get the box out. It’s not a design flaw, I was just trying to maximize space. I recommend you use that space for loose items, packages of baits, etc and not a box.

The small boxes that lock into the under satchel area were the biggest area of needed improvement. Since there are latches on both sides of the box, when they go into the locked position, the latch unlatches when you try to get the small box out from underneath the satchel. You can’t get a solid grip on it to get it out. I end up putting the box in my lap backwards and pushing the small box out of the locked position from the back. Does it hold the small boxes in place? Absolutely! Is it convenient to get them out? Nope. Maybe an overstrap or additional way to secure them in the undercarriage would be better served. I ended up on both trips out with it leaving the small boxes on the deck so I didn’t have to fight with it.

The 3000 size is perfect for putting in a kayak tankwell. It stores quite a bit of tackle despite the small footprint and will serve a lot of anglers well. I particularly caught a lot of interest from inshore saltwater fishermen. The Zerust and a compact, waterproof  box like that is exactly what they need and want for stalking the marshes. Zerust has a big hand in that.

If you want to check one out and save some money, click here and select small. The small size is the 3000. The medium is the 4000 series.

Hard sided tackle storage doesn’t always work for folks so it might be worthwhile to check out some soft sided tackle bags as well.