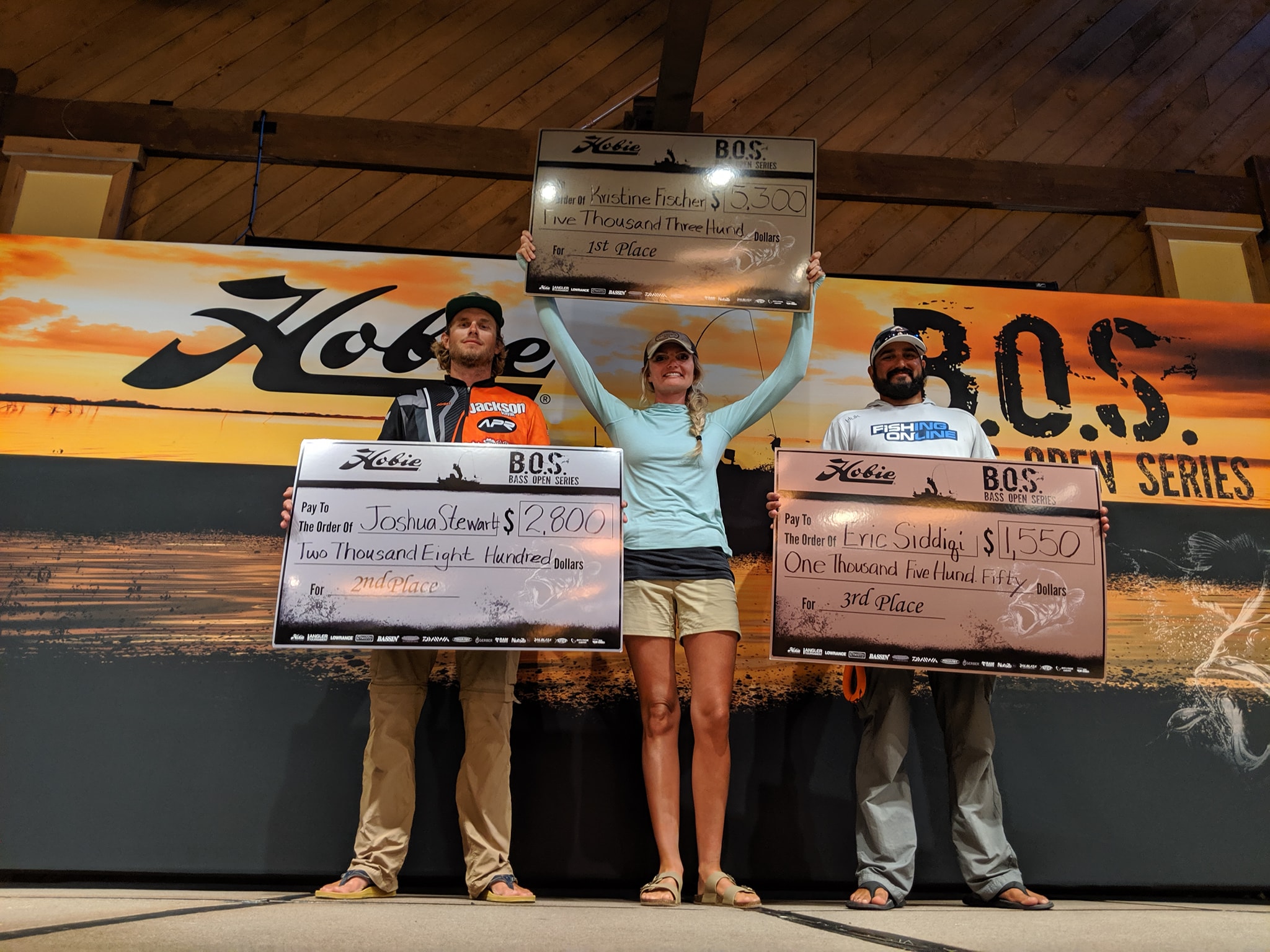 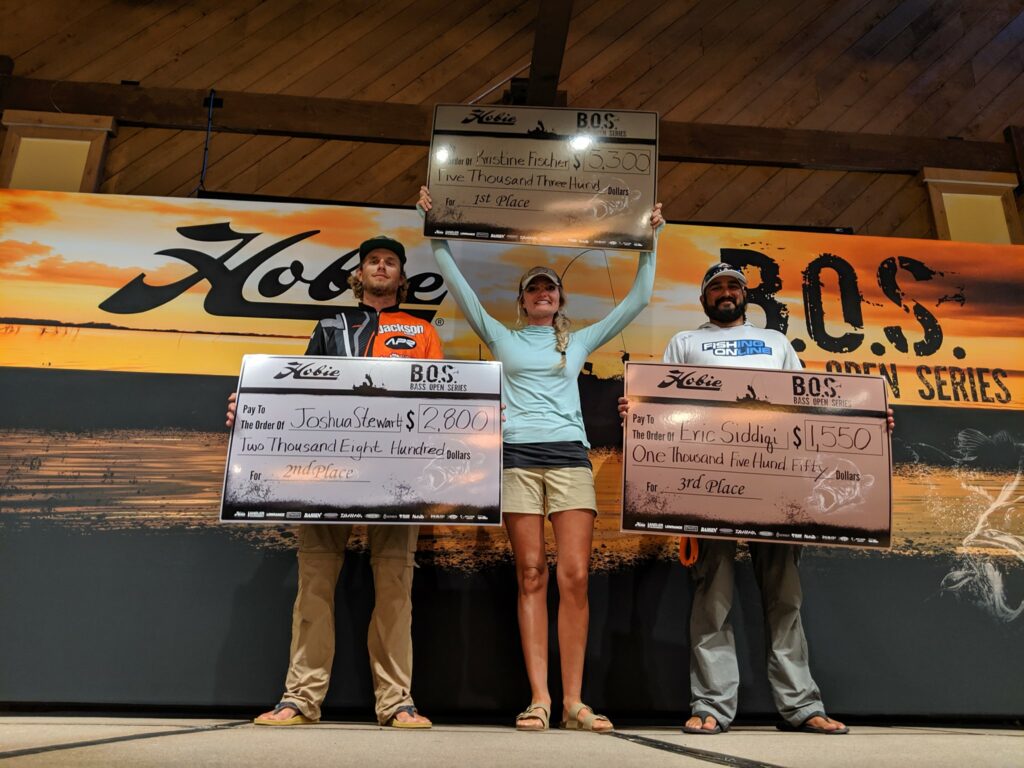 In this first installment of Winner’s Circle, I talk to Kristine Fischer, the winner of the Hobie Bass Open Series on Kentucky Lake. I’ve followed Kristine’s climb through the ranks over the years and can say I’m not surprised she stood atop the podium after the two-day event in Tennessee. I borrowed a few minutes of her prep time for an upcoming musky trip to pick her brain about the experience and learn a little bit more about the newest Hobie Bass Open Series winner.

Kristine had a pretty great tournament season last year but fell short of a couple of goals that she reloaded for the 2019 season. Going into the event on Kentucky Lake, these two aspirations stayed at the front of her mind: qualify for Hobie Worlds and qualify for the end of year Hobie Tournament of Champions. Her confidence was running high. She told me, “I knew my time was coming”.  It’s not surprising. She finished third in the HBO in the same location last year.

While known by many to prefer deep water ledges, Kristine bucked comfort for smart, scientific analysis and found a pattern that produced two days in a row in lots of different locations. I asked for some details and she obliged.

“The deep bite just wasn’t there for me so I went to Google Maps and started looking for something different. I tried to find areas where the water would be higher than normal and went to fish bushes and stumps in finger creeks,” she divulged.

Electronics, kayak choice, and outfitting played a huge role in the victory. Kristine fished out of a Hobie Pro Angler 14 outfitted with a Power Pole Micro anchoring system and a Lowrance HDS 9 Live. As conditions changed, anchoring quickly became important with 30 mile per hour winds on Day 2 and being able to really fan cast an area while picking it apart with different baits. The ability to switch between baits and having a kayak like the PA 14 proved important too.

“I had 8 or 9 rods with different baits and would switch between them until I locked onto a pattern. And pretty soon the weather would shift a little bit or the water temp would change and the pattern would switch. Having space to fan out my rods like that was a big help. It made switching fast and easy. “

Both mornings started with Kristine throwing a buzzbait or a popper. If a fish came up short on a strike, a quick flick of a Caffeine Shad would usually get the fish to commit.

Kristine mentioned water temperature a couple of times during our chat so I had to ask if there was a magic number.

“Day 1 it seemed to be 71 degrees. If I could find cooler water, like in the backs of creeks, I knew I had a short window for a big fish bite. Something happened at 80 degrees and the big fish quit. I’d see tons of carp, gar, everything but big bass. Day 2 it was 77 degrees. With all the rain I knew if the water temp stayed down I’d have a great day.”

Kristine used the Lowrance HDS 9 Live to search for stumps and underwater structure while closely monitoring water temps in the backs of the creeks she was fishing. It struck me during our conversation about how scientific her analysis had been and how patterning weather, water temps, scouting of known areas and where the fish were in the reproduction cycle helped give her the confidence she needed to win.

Words of Advice for Tournament Anglers

The mental game is something she couldn’t express enough. The journey to the top spot has a lot to do with preparation but the day(s) of the tournament, that can all fall apart. Kristine shared with me a turning point in her Day 1 experience on Kentucky Lake.

She sat for a minute, refocused, and realized that her pattern was good. She just needed to calm down and fish.

“Your own mind can be your worst enemy out there. You can never count yourself out. You have to believe in yourself and trust your gut. As soon as you let doubt come into the picture, it can be over.”

Kristine utilized St Croix rods, including a new 7’5 Medium Heavy Frog rod paired with Shimano reels to take the top spot. She used the new “not your typical club” frog rod to skip a buzzbait under and around cover.

With two people left on stage, Tournament Director AJ McWhorters started spinning the tale of the winning inches, specifically the monstrous 89 inch day of the winner. At that moment Kristine knew she had won, well before AJ called her name. She shared with me that moment.

“Everything hit me at once. Winning the tournament, qualifying for TOC and Worlds, all right then.”

Being the first female angler to win a national tournament isn’t lost on her. Fischer said she is flattered by the number of women and young girls who have reached out in the last 24 hours that she has inspired but that wasn’t really the goal; it’s just a nice by-product. The journey to be seen as an angler first and foremost has been a battle but over the last two seasons, Kristine has shown the podium is always within grasp and she will take your money.

As a tournament veteran, she doesn’t have many changes she’d like to see implemented save for one: Prefishing in bass boats.

Fischer shared she feels it discredits the sport and while she’s not completely against it, a 20-day ban on bass boat prefishing would help keep the integrity in it. She did add though ” to each their own, it’s just not how I would do it.”

Kristine Fischer is a bookkeeper, outdoor writer, landlord, and occasional fishing guide. When she’s not tournament fishing, she’ll most likely be stalking musky.

Krisitne’s next stop will be the Hobie Bass Open Series on Lake Fork, TX in a few days. 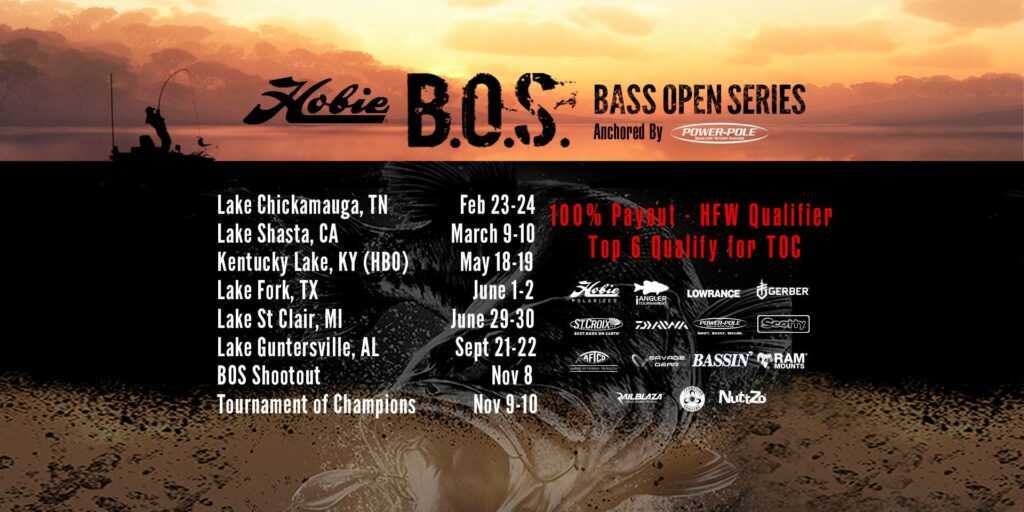