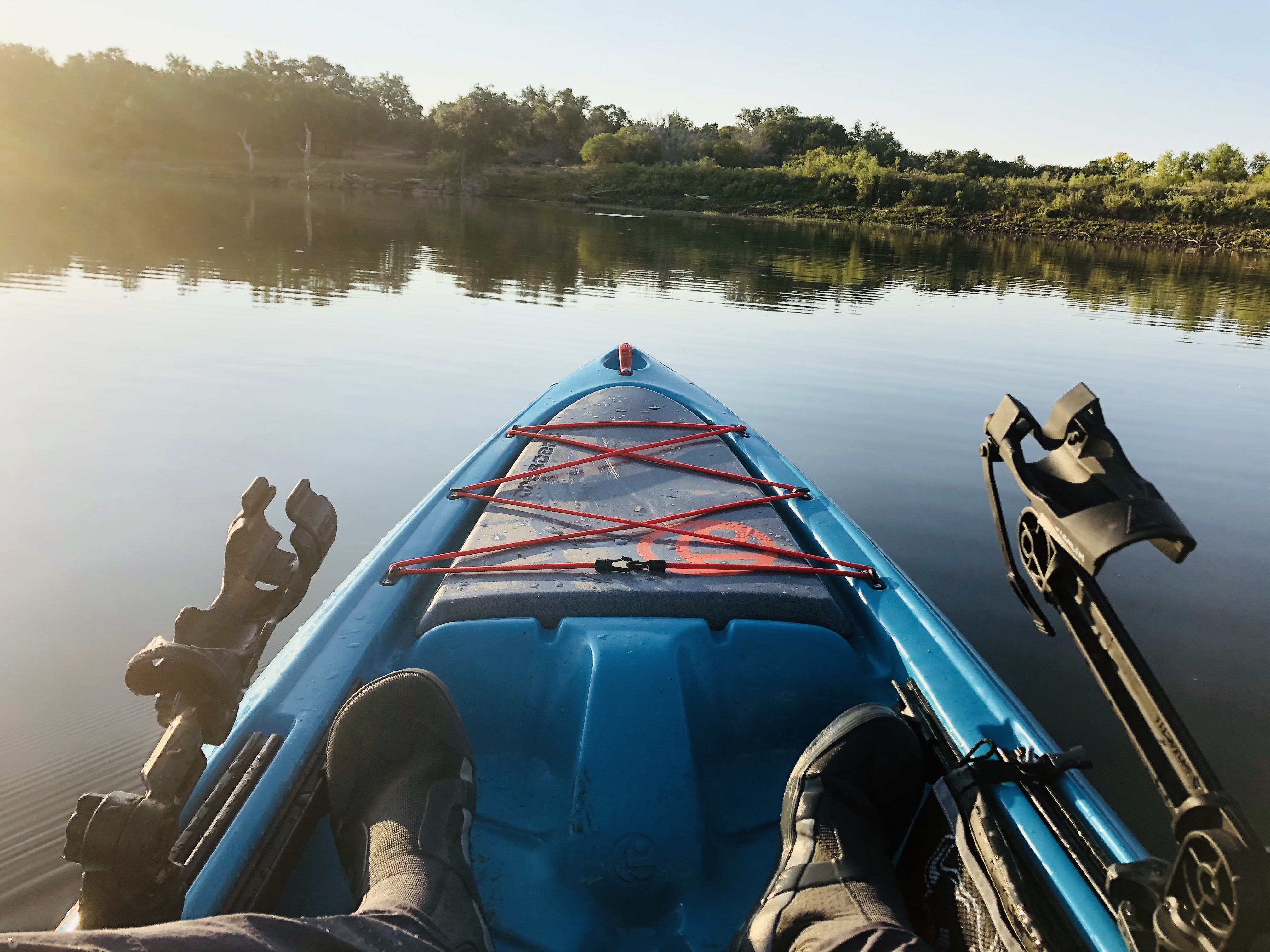 The Crescent LiteTackle is the second in the line of fishing kayaks Crescent has developed over the last three years. At just over 12 feet, it offers a console-free deck, nice appointments and is a completely made in the USA kayak, including the frame style seat. I got to spend some time with one of the LiteTackle fishing kayaks last weekend in conditions that started as calm and ended with 20+mph gusts. All the details are below but before we get there, here is what Crescent says about the LiteTackle.

About the Crescent LiteTackle Fishing Kayak

In contrast to cluttered fishing kayaks on the market, the LiteTackle utilizes clean, refined design without limiting functionality.

The LiteTackle offers an open floor layout for casting and stand up paddling, a cockpit that fits a 55 gallon cooler to be used as an elevated seat, integrated accessory rails, one of a kind storage, and versatile bungee strap down systems. You can even clamp a trolling motor straight to the stern. 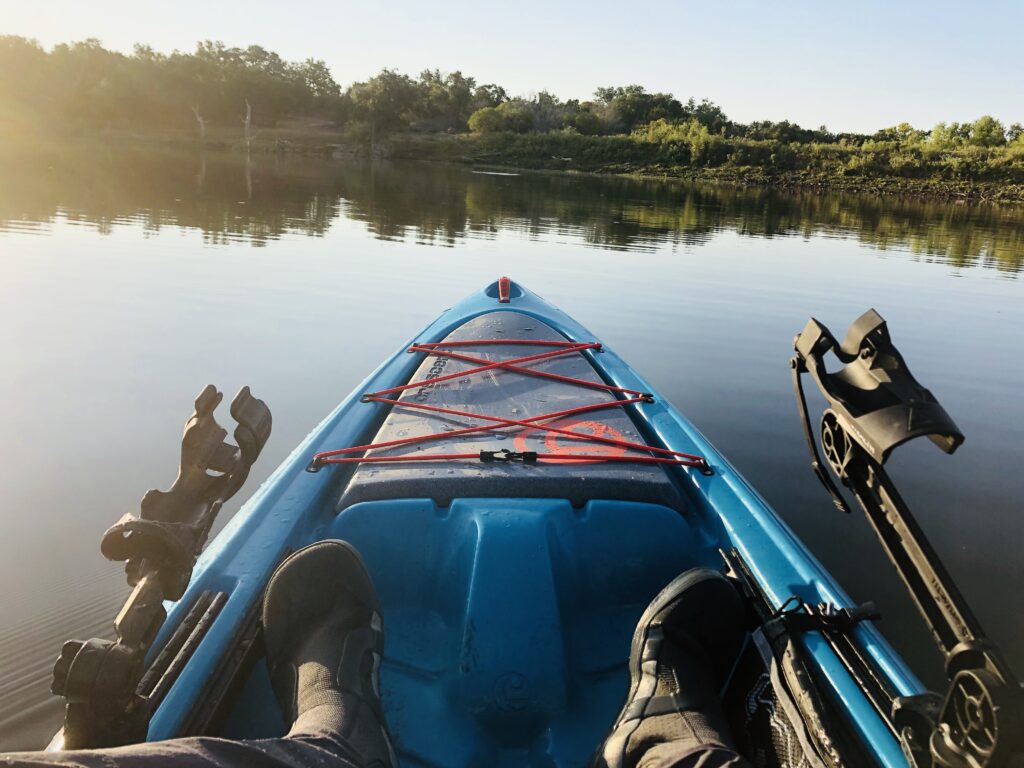 The LiteTackle sports a custom look, straight from the showroom floor. American Made and constructed of the highest quality resin available, the Lite Tackle is the best value on the market.

The patented hull design commands the water from flat to moving, allowing you to fight the fish instead of the kayak.

The Crescent LiteTackle is different than a lot of kayaks out there under the thousand dollar price point. It’s not imported but rather made in a factory here in the United States and is designed by kayak anglers, not recreational watercraft engineers. The appointments on the LiteTackle are on purpose and are utilitarian in nature with a touch of aesthetic flare.

The stability in this kayak is different than many models as it has primary and secondary stability while still including a significant rocker to keep the bow riding higher in the waves. What that means for the paddler is a kayak that won’t slip out from underneath them if they lean, and a better tracking kayak that efficiently channels water under the boat, not into it. 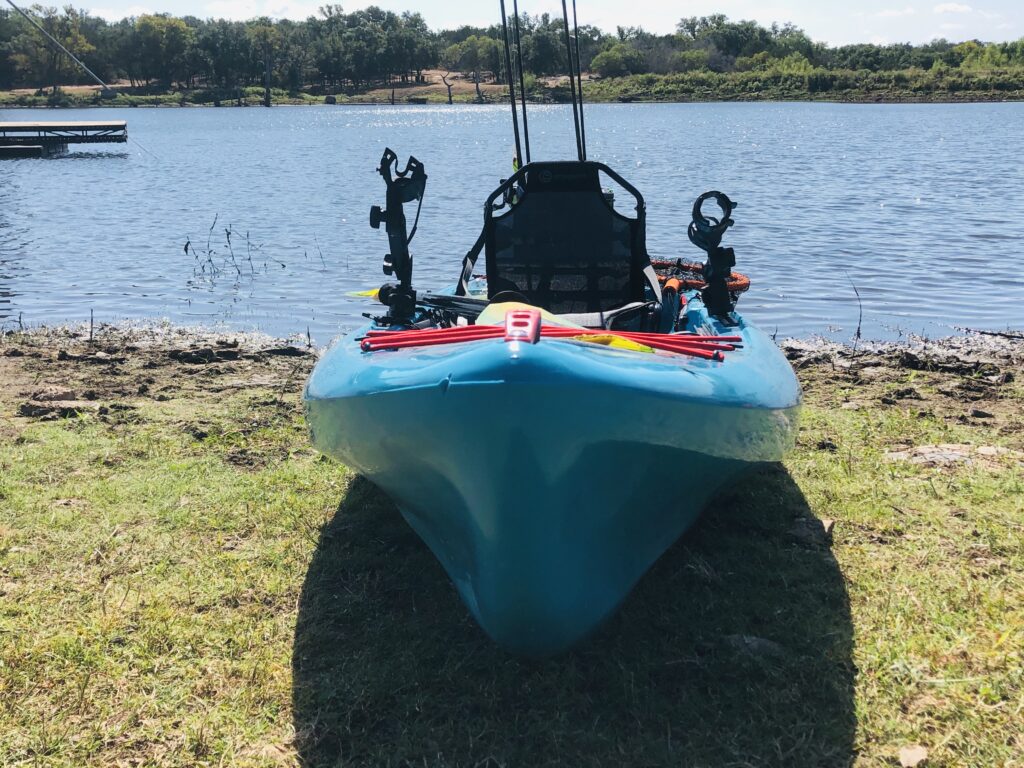 It is my belief that a good many people will be able to stand and fish from this kayak. At 34 inches wide and with no intrusion of a console on the deck, your feet can go where it feels most comfortable with no limitations. The open deck is also great for fly anglers needing a clean deck to strip line.

The storage hatch upfront is big and able to accept a lot of gear under hull which is great for multi-day river camping excursions. I found the front hatch to be watertight in my time on the water with significant wave splash.

The tank well holds a crate just fine with room to spare and the squared-off stern allows for the addition of a trolling motor if you so desired without having to buy additional pieces and parts.

The seat I found comfortable, adjustable and a vast improvement over the prototype seat which had less curve in the backrest. The handles and their placement on the LiteTackle are done intelligently by someone who has had to transport kayaks before The handles themselves are rigid and not the typical knuckle buster style. 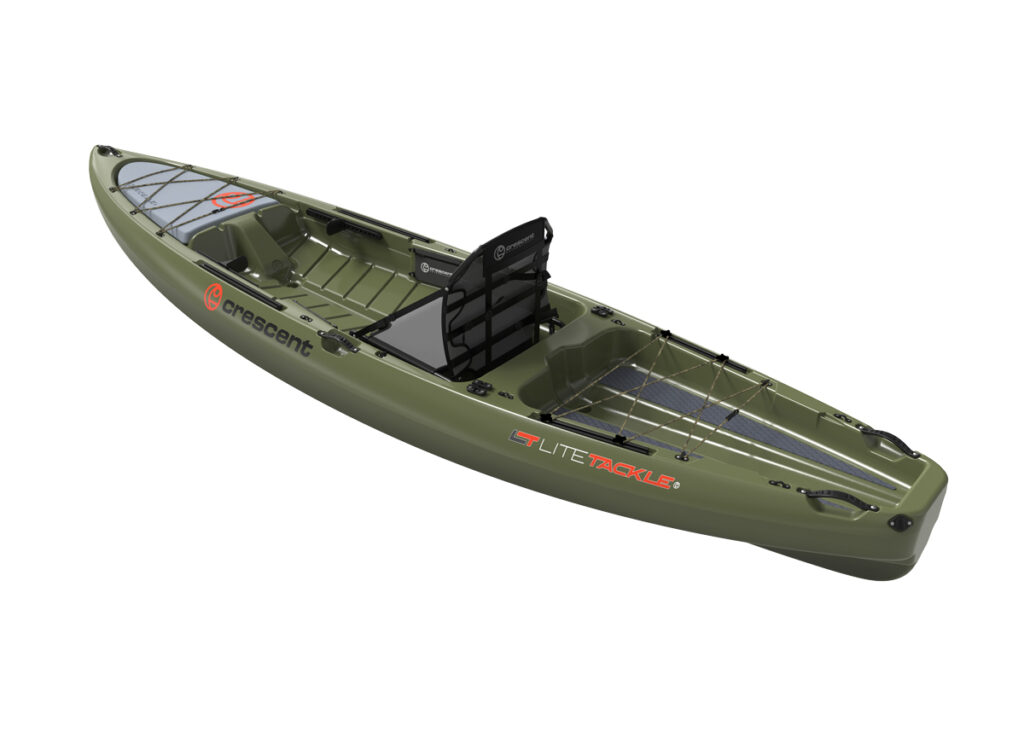 Typically with a good tracking kayak, the paddler will experience sluggish turning. The Crescent LiteTackle is an exception to that. With a deep dig of the paddle, the kayak turns 90 degrees even with the wind. This lends itself to being able to not only perform in open water but in rivers as well. 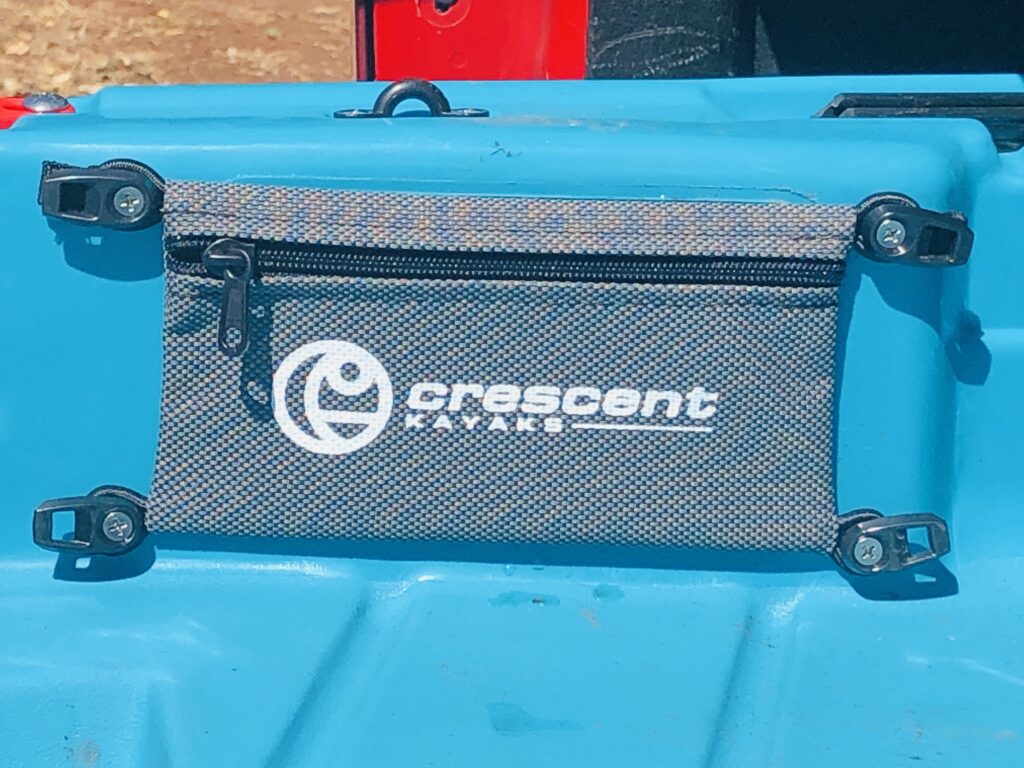 I’d love to see future models with a deck mat. While the deck as currently designed is texturized enough to avoid slipping, a sound dampening mat would be a good addition.

In the front hatch, there isn’t currently a bucket so smaller items may slide around in the hull if the kayak goes off parallel. I’d like to see a bucket accessory for the 2020 models that is easily removable.

The only other real gripe I have is with the seat height. When seated, you get great performance in paddling because you are close to the water. This, in turn, might make it difficult for some folks to stand and sit while on the water without the addition of a stand assist strap. If there were a high seat position available that raised the seat four to six inches, that would alleviate most needs for an assist. I will say though, this will probably only apply to the heavier and taller paddlers of the kayak.

After spending several hours in the Crescent LiteTackle and having paddled almost every sub $1k kayak on the market in the last five years, I can confidently say the Crescent is at the top of the list for best in class. As a paddle kayak with a frame seat, trolling motor ready, stand and fish ready, fly fishing capable, made in America, and only $899, if you haven’t looked at this kayak, you should. It won’t fit everyone’s needs, but it will check a lot of boxes for a lot of people.