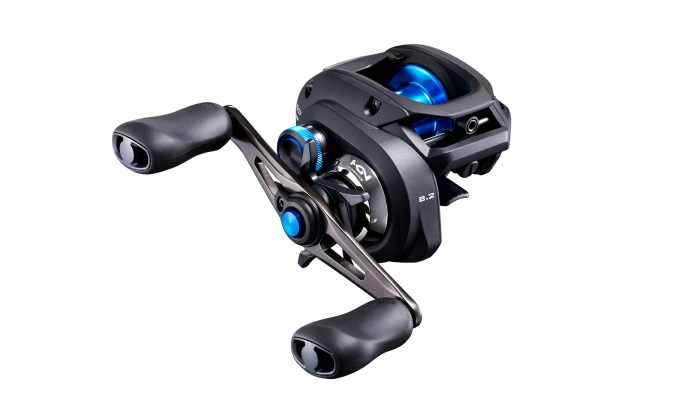 Last year Shimano broke the DC reel price barrier with the much anticipated Curado DC coming in at $249. Then Shimano developed their new SLX reel into an SLX DC and offer it for $189. As a very affordable reel for almost any angler out there, I needed to see if the hype lived up to the potential promise.

One aside before I get too deep into this SLX DC review: I own and have reviewed the Curado DC previous to buying the SLX DC so some of this review may seem like a comparison and may slightly slant what opinions I have.

About the Shimano SLX DC

The SLX DC weighs 7.6 ounces and is available in retrieve ratios from 6.3:1 up to 8.2:1. The following features are included in the design:

I-DC4 Intelligent Digital Control braking system with an easy to use, 4 modes can be set using the external dial for Max Distance, Braided/Mono line, Fluorocarbon line and Skipping for you to place the lure at those hard to reach places. This will allow anglers to fish a wide variety of lures, in any conditions, with minimal adjustment to the reel. I-DC4 reads various situation changes from casting to arrival of lure at target spot through the reading of the spool’s rotation and makes fine adjustments to the brake accordingly.

The first question I normally get from a potential buyer of the SLX DC is what’s the $60 difference between the Curado DC and SLX DC? The Curado DC has all of the technologies in the SLX DC plus the following ones: 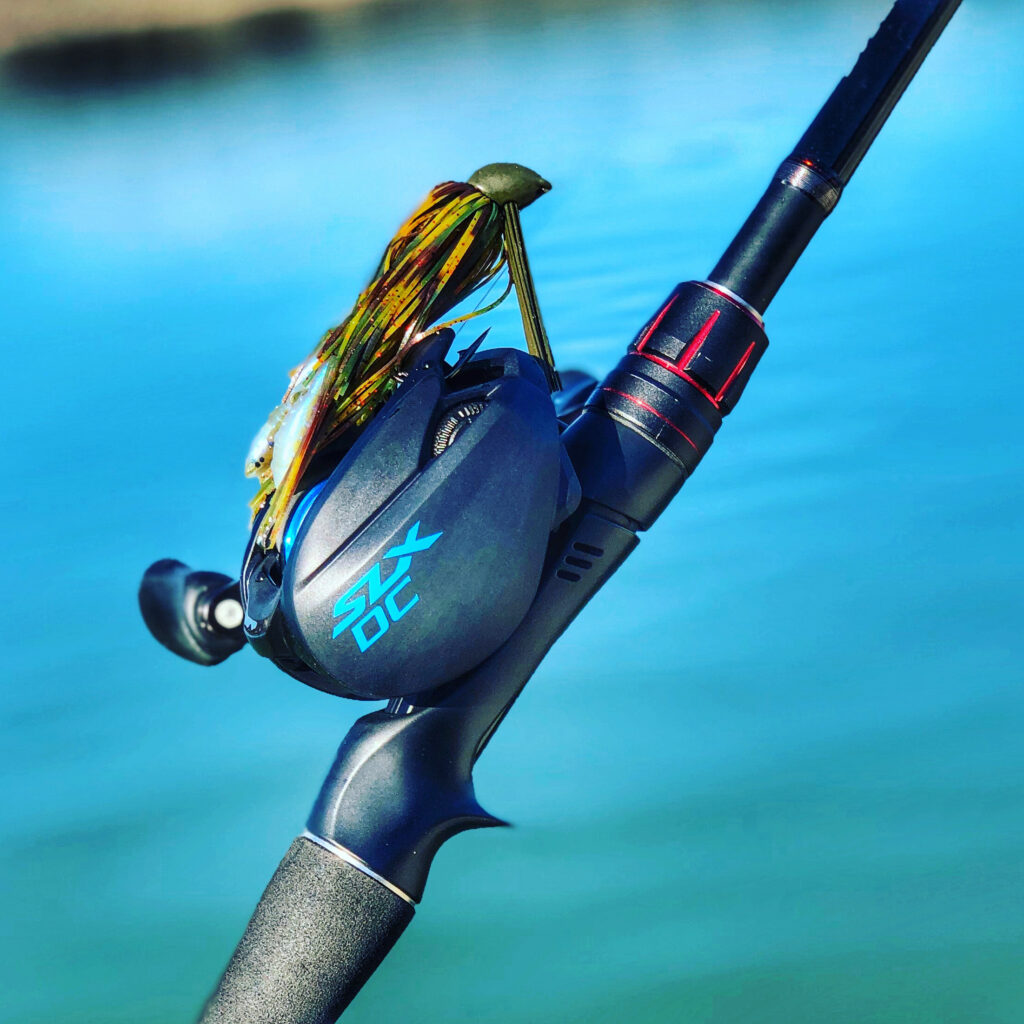 CI4+ CI4+ is an advanced version of the original CI4. This highly technical material is 2.5 times stiffer than CI4 and is used to increase weight savings.

Cross Carbon Drag This drag material provides a wider range of drag settings, along with the smoothest Shimano drag performance ever.

MicroModule Gear The MicroModule Gear system creates a smooth retrieve. The new gear set makes use of smaller teeth and more of them. This means that there are more contact points between the drive gear and pinion gear. The result is a more efficient gear train with less gear feel.

S A-RB These bearings have been through the same process as our A-RB bearings, but feature shields on both sides of the bearings that reduce the possibility of salt or sand inhibiting the bearing’s rotation.

X-Ship X-Ship provides improved gear durability. By supporting the pinion gear on both ends with bearings, the pinion gear maintains precise alignment with the drive gear. This means the gears will stay in the same position under the heaviest loads. The added benefit is that friction between the spool shaft and gear are eliminated. This will enhance the casting performance of the reel with lighter lures, and allow for longer casts.

What does all that mean? The Curado DC casts further, reels smoother, and is salt and sand safe (as much as a reel can be).

Some additional tips on using a DC reel

I’m guilty of not understanding this at first and was wondering why a tiny adjustment made such a huge difference. The problem was, I was adjusting to the weight of the bait, not the side movement in the spool.

Also on the reel is an adjustment dial that runs from 1 to 4. This is not a true tight, tighter, tightest dial. Setting 4 on the dial is for the most braking control. It will allow you to skip docks, flip, and have very little chance of backlash. Setting 3 is for fluorocarbon line. The DC computer already has it calculated for the best performance. The same goes for Setting 2. This one is for braid. Setting 1 is not a true free spool but rather a minimized braking solution. It will still use the brakes but sparingly. If you need to bomb a cast and willing to risk a potential backlash, that’s the setting for you. 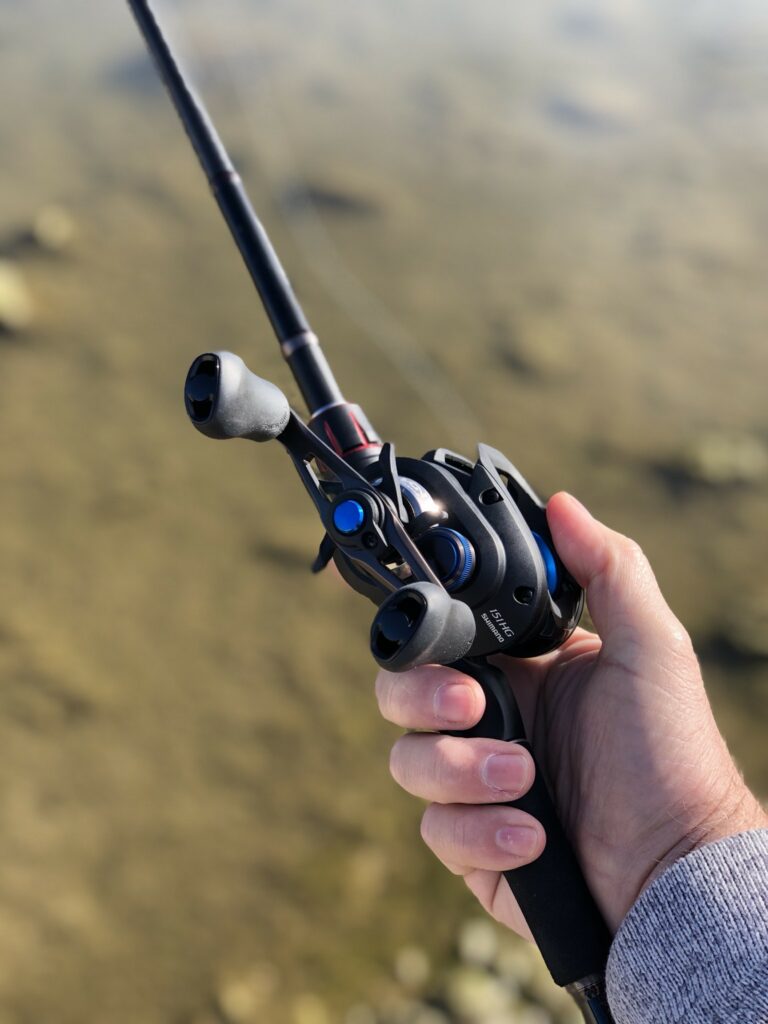 The Good Stuff on the SLX DC

The SLX DC performs really well. It’s definitely a step up from the traditional SLX for brake control. Normally when a less expensive reel comes on the market as a “little brother” model it gains weight. That isn’t the case with the SLX and Curado. Most models are within two-tenths of an ounce as far as overall weight.

I initially had some slight issues getting lighter baits to throw but it’s because I had the reel on Setting 1 and was adjusting for the weight of the bait. After I did some additional research, I remembered that the spool tensioner knob and Setting dial was used differently. After that fix, I could throw lighter baits with ease. For wind and light baits, I prefer Setting 4.

The price point, though we’ve already mentioned it, warrants being mentioned again. The SLX DC is $10 more than a traditional Curado with no DC components. That’s pretty amazing.

The first thing I would do is include a manual or QR Code that explains the Setting 1-4 meanings and also how to adjust the spool tensioner knob on a DC. I learned all of that information from Shimano sponsored anglers making videos and Marketing folks through verbal communication. I haven’t seen so much as an info card in the box. You really have to search for it which could lead to dissatisfaction if you adjust the reel incorrectly based on past experience with conventional reels.

I could feel the difference in the gears from the Curado to the SLX. The SLX DC just isn’t as smooth and you can feel and sometimes hear it upon retrieve. That was a slight disappointment.

The side plate issue I’ve talked about is still a thing with the SLX DC. If you open the side plate, there is nothing that holds it on so making adjustments on the water, especially in a kayak can be risky. I’d love to see a round hinge or beetle wing built-in.

Is this the same as the Curado DC? Decidedly not. It is very important to note, however, if you want a freshwater reel that is reliable when you can’t afford backlashes, costs less than $200, and can handle the grind of seasons of fishing, the SLX DC is a great choice.