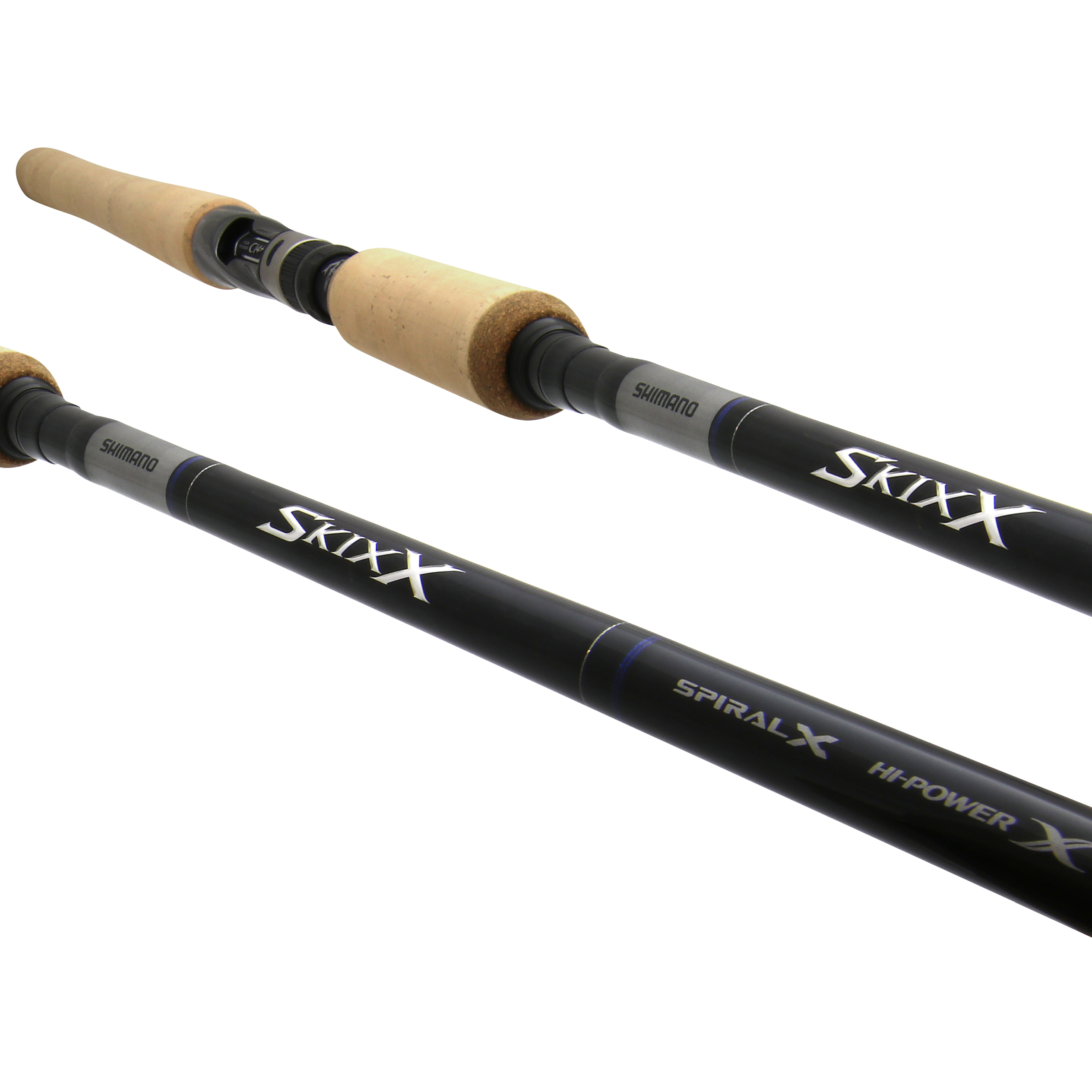 Fishing for freshwater’s apex predator is always a marathon, never a sprint. It’s casting big lures with big, powerful reels and rods that take a toll on an all-day fishing adventure.  While they won’t make a musky follow or engulf your lure, Shimano’s new SKIXX rods offer a slew of performance features, most notably the combination of Spiral X and Hi-Power X blank construction, to provide an edge for more success.

Offered in seven casting models in sizes from a heavy power eight-footer up to an extra-heavy power nine-foot-six, the new SKIXX musky rods will officially be introduced on January 23 at the Chicagoland Fishing, Travel & Outdoor Expo at the Schaumburg Convention Center.  Noted ‘musky hunter’ Jim Saric – who played an integral part in developing the new rods, will be in the Shimano booth at various times during the show to talk musky fishing and about the new SKIXX series.

Shimano’s latest advancement in fishing rod technology – first showcased in its saltwater rods – gives anglers the ability for both longer and more accurate casts, increased fish-fighting ‘catching’ power and control, along with added blank durability. According to Trey Epich with Shimano’s product development team, Spiral X provides the foundational basic structure to the rod, where an inner and outer layer of high-strength carbon infinity tape is tightly wrapped diagonally in opposite directions with a vertical sheet of carbon material in between. This allows Shimano to build thin, strong, and lightweight blanks that prevent rod twist to improve casting distance, accuracy, and control and also prevents blank ovalization for better lifting power and blank strength.

Hi-Power X is the reinforcing structure to the SKIXX rods, contributing to the lightweight blank construction, along with enhancing torsional rigidity from carbon tape being wrapped diagonally on the outer layer of the blank.

“With how the SKIXX rod blanks are made, not only do I notice added casting distance with less effort, it also eliminates any lateral vibration and provides more control while fighting muskies,” explains Saric. “From all my field-testing over the past year, what I really noticed is with the rod not twisting, all the rod’s energy is focused on direction and distance. In most conditions, I was seeing casts going 20-percent further, and was able to it without being completely drained at the end of a long day on the water.”

While the SKIXX eight-foot heavy and extra power rods are one-piece models, the eight-foot-six heavy and extra heavy power, and nine-foot medium-heavy and extra heavy power rods feature a two-piece handle. This unique construction process – proven with saltwater rods – solidly joins the pieces at the foregrip, “delivering strength and performance rivaling any one-piece rod,” Saric said. “Plus, the added bonus makes these longer rods easier to transport or store in any rod locker or vehicle, which was also considered by making the longest rod in the series – the nine-foot-six SKIIX 96HX – with a telescopic handle.” 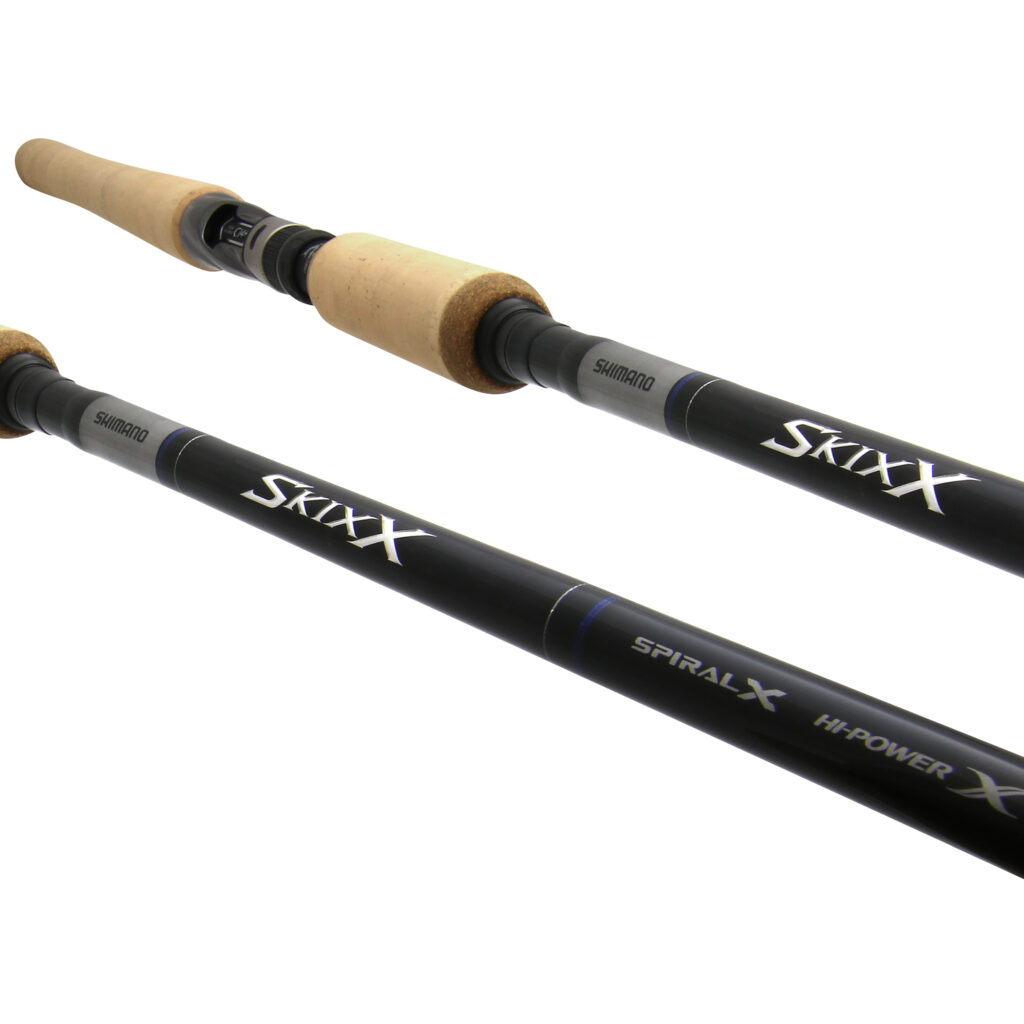 When casting up to one-pound soft plastics, Saric recommends SKIXX 90XH paired with a Tranx 400. For big bucktails, he said the SKIXX 96XH with a Tranx 400 equipped with a power handle is a treat to fish with, “and when I’m using Top Raider or any other topwater prop baits, I’m rigged and ready with SKIXX 90MH with a Tranx 400.”

All the SKIXX rods feature Fuji Alconite guides and premium cork fore and rear grips. Except for the biggest SKIXX 96XH with a Fuji reel seat, the other SKIXX rods are all designed with Shimano’s CI4+ reel seats to further reduce overall rod weight. 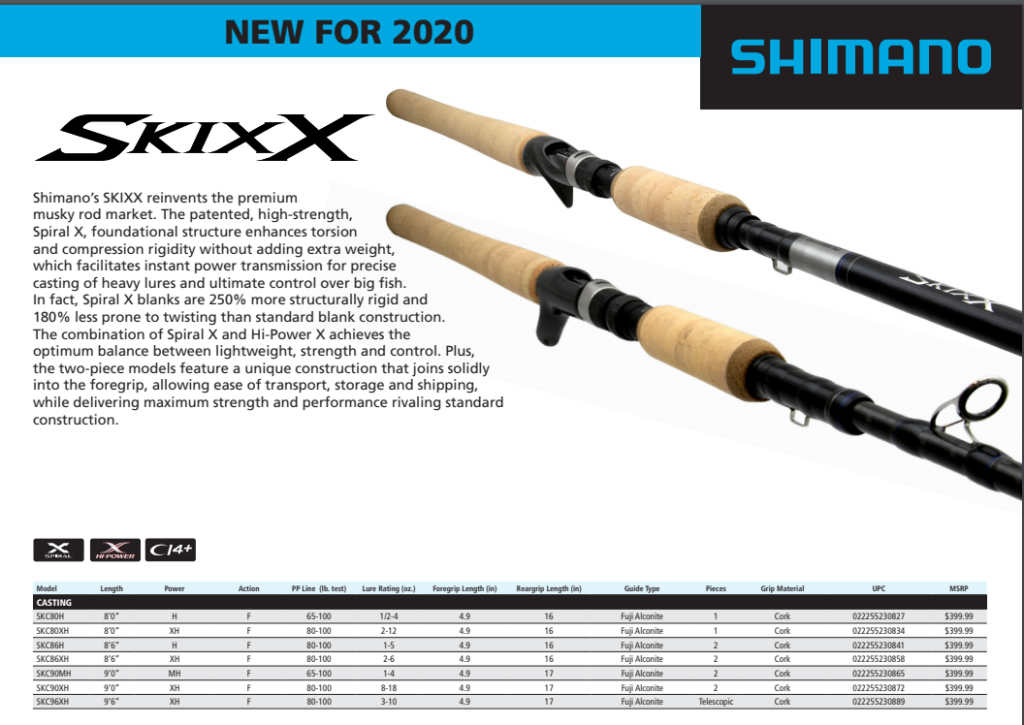