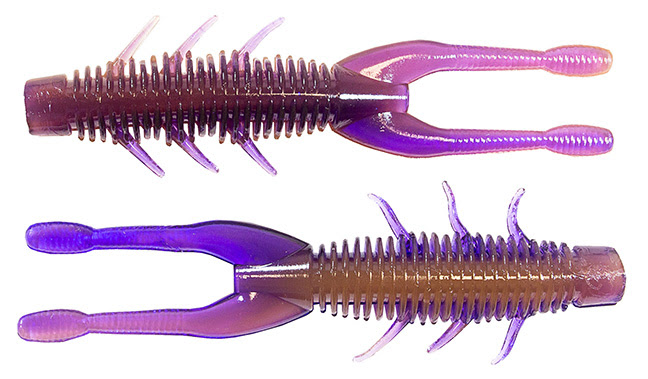 LADSON, SC (May 1, 2018) – For the legendary Ned Kehde — the man behind the miraculous Ned Rig— testing prototypes and lending insights into bass bait design is all in a day’s “work,” if indeed it’s possible to assign such a term to fishing nearly every day, all year long. Following a two-year testing phase, Kehde simply refers the new Z-Man® Finesse TRD HogZ™ as “our best producing coldwater bass bait, period.”

During one brief outing, Kehde caught 55 bass in 69 minutes on a single 3-inch HogZ. “I mailed the bait back to Daniel Nussbaum of Z-Man,” recalls Kehde, “after this lone HogZ produced 112 fish total. It was still in really good shape.”

Kehde, who has chronicled and participated in the finesse bass scene going back to the early days of Guido Hibdon and Chuck Woods, says the HogZ pays homage to Woods’ original Puddle Jumper—a timeless, pressure-immune bait and often disregarded design that’s accounted for untold thousands of bass and other species. Nussbaum, President of Z-Man Fishing, calls the HogZ “the next phase of the Ned Rig genre; a highly detailed, lively, yet subtle bait that’s already selling out in select hot zones across the nation.”

Highlighting the newest member of Z-Man’s ElaZtech finesse bait line, the HogZ sculpt features a specialized flattened nose, facilitating tight flush-rigging to a mushroom style jig, such as Z-Man’s Finesse ShroomZ or NedlockZ HD. Kehde further notes that Z-Man mimicked the shape of its own power-fishing creature bait, the Boat HogZ. “The downsized TRD HogZ sprouts three fine appendages on either side of its multi-ribbed thorax, abstractly replicating the swimmerets adorning a crayfish’s abdomen.”

Breathing life into the finesse creature bait, a pair of refined legs kick, quiver and hypnotically glide. Terminating each leg is a small “foot,” providing surplus thump, plus accentuated up-and-down jet propulsion, reminiscent of the fast-darting movements of crayfish and other invertebrates.

From Kehde’s Midwest reservoirs to Northeastern smallmouth streams, guide Joe Raymond has quietly relied on the TRD HogZ for the past two seasons. “For a guide, this little bait is a dream because it’s even more attractive to bass than a tube, and almost can’t be fished wrong,” says Raymond, who runs 225 trips a year, via susquehannasmallmouthguides.com.

“It’s become my go-to presentation for much of the year for big river smallmouths. Just today, we rocked a bunch of bass by fishing it both like a shakey-head and by dragging and deadsticking it on bottom, rigged on a 1/5-ounce NedlockZ jig.

“I fish the baits with a collection of 6-foot 10-inch St. Croix Legend Xtreme spinning rods and 2500-size Shimano CI4s. Each is spooled with either 20-pound Seaguar Smackdown braid and a 10-pound test leader of Seaguar AbrazX fluorocarbon or a mainline of 8-pound AbrazX. Throw this bait in ambush areas—behind boulders, eddies and other visible targets when working down a bank—and you’ll be hooked up pretty often.

“I think of tough ElaZtech and the HogZ specifically, as tube fishing 2.0—the future of finesse bass fishing. Around here, you have to dig deep to even find baits left on the pegs. That’s how hot the HogZ has become.”

Raymond says he’s not sure what the bait imitates—crayfish, hellgrammite or a general ‘something alive and tasty’—but he’s pretty sure fish respond to it because they haven’t seen anything like it attached to a jighook. “Fishing is really competitive on the river here,” Raymond adds. “Occasionally, I’ll fish through one of my better spots and fail to get bit. When that happens, I’ve learned it’s usually because someone’s already fished the spot with HogZs. It’s like the same thing that happens when you work an area with live bait; catches every active bass in the neighborhood.”

Outside its lively movements and natural underwater posture, the buoyancy of the TRD HogZ is an overlooked attribute. “To the delight of many finesse anglers,” observes Kehde, “these particular ElaZtech baits are not salt-impregnated, making them exceeding buoyant and durable. We’ve noticed the extra buoyancy gives these baits a more pronounced glide, an essential element in our style of fishing.”

Raymond adds that the bait’s buoyancy also makes it work well over snag-inducing rocks, as well as sitting in a natural tail-up position when deadsticked on bottom. “The Hogz’s posture keeps the hook up and away from rocks or wood. But it can still become snagged when pulling between rocks. Actually, buoyancy is why it’s so important not to snap the bait off on snags. The HogZ looks so lifelike on bottom, even when it’s snagged and broken off an angler’s line that fish often still eat it. That’s a bad deal all around.

“If you don’t break off, a single TRD HogZ is durable enough to last all day—even a wolfpack of hungry bass aren’t mean enough to shred it.”